(dailyFX) – EUR/USD extends the rebound from the monthly low (1.1753) as the European Central Bank (ECB) plans to carry out the “pandemic emergency purchase programme (PEPP) with a total envelope of €1,350 billion,” and the exchange rate may continue to track the August range ahead of the Federal Reserve meeting even though the Relative Strength Index (RSI) retains the downward trend carried over from the end of July.

EUR/USD retraces the pullback from the 2020 high (1.2011) as the ECB sticks to the status quo and pledges to “conduct net asset purchases under the PEPP until at least the end of June 2021,” with the central bank going onto say that “the outlook for real GDP growth has been revised up for 2020 and is largely unchanged for 2021 and 2022.”

The updated staff projections suggest the ECB is in no rush to alter the path for monetary policy as “incoming data and survey results indicate a continued recovery of the euro area economy,” and it seems as though the Governing Council will retain a wait-and-see approach throughout the remainder of 2020 as President Christine Lagarde and Co. insist that “net purchases under our asset purchase programme (APP) will continue at a monthly pace of €20 billion, together with the purchases under the additional €120 billion temporary envelope until the end of the year.”

In turn, current market trends may keep EUR/USD afloat even though the ECB “continues to stand ready to adjust all of its instruments,” and the crowding behavior in the US Dollar looks poised to persist ahead of the Federal Open Market Committee (FOMC) interest rate decision on September 16 as retail trades have been net-short the pair since mid-May. 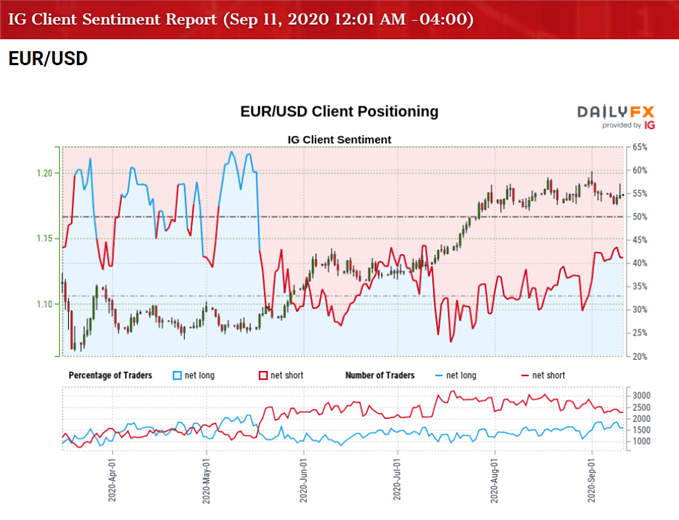 Open interest for EUR/USD has fallen 9.68% from last week amid the adjustment in retail positioning, but the crowding behavior in the US Dollar looks poised to persist as 43.83% of traders were net-long the pair earlier this week.

With that said, the tilt in retail sentiment may continue to coincide with bullish behavior in EUR/USD as it tags a fresh yearly high (1.2011) in September, and current market trends may keep the exchange rate afloat ahead of the FOMC meeting even though the Relative Strength Index (RSI) retains the downward trend carried over from the end of July.