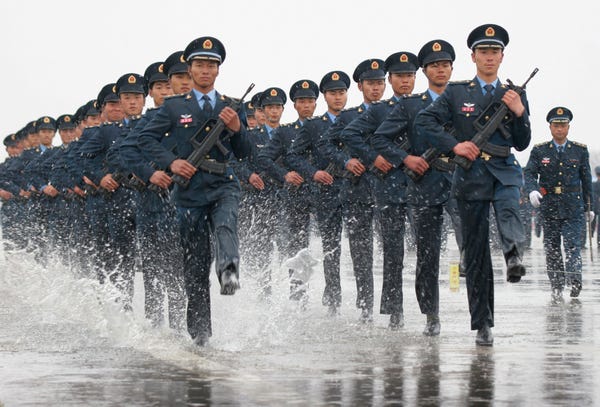 (CNBC) – As China grows in its economic and military strength, global investors and companies operating in the country face a dilemma, according to one analyst.

“China is converting its economic growth into military power, and I think here is the true dilemma for those that seek to invest in China. It’s understanding precisely what you are investing in, what is going on here,” said Jonathan Ward, founder of advisory firm Atlas Organization.

Speaking at the inaugural Jefferies Asia Forum last week, Ward said there are many Chinese corporations — including those in the aerospace, tech and construction industries — that are “backed by the military.”

As the line between state and business blurs, it becomes harder for investors to know how much control the Chinese government has over the company, and how independent the business might be.

China’s defense spending has grown and is now greater than all its regional neighbors combined, Ward said. He cited the Pentagon’s latest report on Chinese military developments and said China’s ground troops, as well as its navy, air and missile forces, were among some of the largest in the world.

“In 2019, the PRC announced its annual military budget would increase by 6.2 percent, continuing more than 20 years of annual defense spending increases and sustaining its position as the second largest military spender in the world,” according to the 2020 China Military Power Report.

Ward also pointed out that Chinese President Xi Jinping has made clear his country’s goal of building a strong army that can fight and win wars.

“We are closer than ever to realizing the rejuvenation of the Chinese nation, and we need to build a strong military more than ever in history,” Xi reportedly said at the founding anniversary of the People’s Liberation Army. “Our military must regard combat capability as the criterion to meet in all its work and focus on how to win when it is called on,” Xi said.

Beijing has also declared that the U.S. a threat to world peace, Ward said.

China’s Defense Ministry spokesman Col. Wu Qian had said earlier in September: “Many years of evidence shows that it is the U.S. that is the fomenter of regional unrest, the violator of the international order and the destroyer of world peace.”

China has also been increasing its military presence in Asia, especially in the highly disputed South China Sea.

It has raised the ire of neighbors like Philippines, Taiwan and Vietnam which also lay claim to parts of the waterway, and drawn harsh words from the U.S. which called Beijing’s territorial claims “completely unlawful.”

Last week, China stepped up its military exercises near Taiwan following the visit of a U.S. official to Taipei. Beijing considers Taiwan part of its territory that must one day be reunified with the mainland, and opposes Taiwan’s participation in international diplomacy.

The Pentagon said the exercises were another example of China using its military as a tool of coercion, according to Reuters.

“At the end of the day, China’s leaders have pulled all of … their industrial might, all of their technological advances into military modernization … designed for conflict in the Pacific — with China’s neighbors and with the United States — they are quite explicit about that,” Ward added.

China is essentially in open confrontation with the U.S. and the region, Ward said.

“So the question then, of course, is what is this all for? … It’s to achieve what China’s leaders have called the ‘great rejuvenation’ of the Chinese mission,” Ward said. “How does China intend to achieve all this? It’s not just the military, it’s really China’s economic engines — the economic battle fleet is really the state-owned and state-backed corporations.”

“The bottom line is China’s goals for … industrial dominance, for technological power — this is all essentially taking shape between the party and its companies,” he said. “Many global banks are looking to expand their operations in China, even as these geopolitical realities take shape.”

“Is (the political risk) really being properly assessed — even in the world’s leading investment banks and institutional investors?” he asked.

Ward added that American multinational companies are going to need to align with the U.S. government’s long-term national security goals.

“As the state-sponsored human rights abuses become more and more obvious … we find that our companies are involved — directly or peripherally,” Ward said.

One “key force” that will determine the outcome of the geopolitical contest between both countries will be how other countries respond to the U.S.-China rivalry, said Kishore Mahbubani of the Asia Research Institute at the National University of Singapore.

“In the first Cold War between the United States and the Soviet Union, there was absolutely no question that United States had far stronger allies – it had allies in Europe, allies in Japan, South Korea, and even major developing countries,” he said.

Mahbubani said today’s situation between the U.S. and China is not the same.

“What’s different this time is that most countries in the world — partly because they have other pressing preoccupations — very few of them (are) rushing to join the United States to say, ‘Hey, I’m on your side, I’m against China,’” he said at the same conference.

To win against China, the U.S. needs to remain the world’s leading economic power and American companies have to win the global competition against Chinese firms, Ward said.

It’s also essential to maintain the military edge over China, he added.