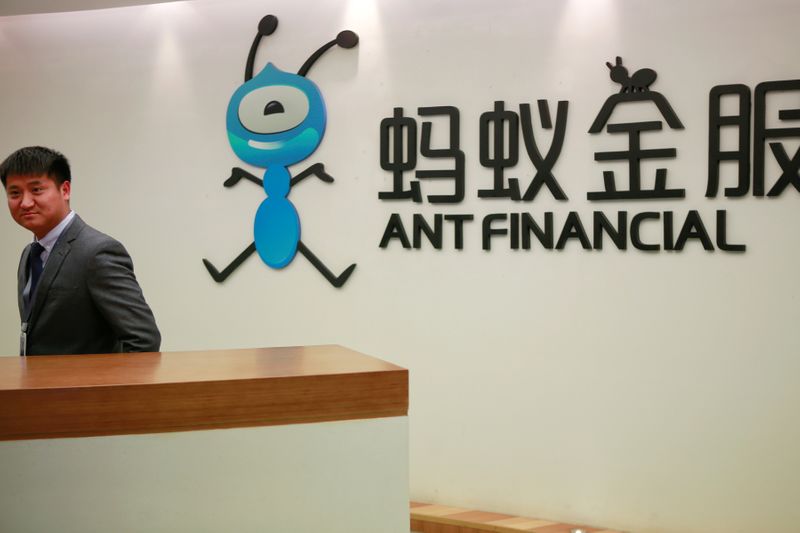 WASHINGTON (Reuters) – The U.S. State Department has submitted a proposal for the Trump administration to add China’s Ant Group to a trade blacklist, according to two people familiar with the matter, before the financial technology firm is slated to go public.

It was not immediately clear when the U.S. government agencies that decide whether to add a company to the so-called Entity List would review the matter.

The move comes as China hardliners in the Trump administration are seeking to send a message to deter U.S. investors from taking part in the initial public offering for Ant. The dual listing in Shanghai and Hong Kong could be worth up to a record $35 billion.

The latest swipe at China also comes in the run-up to the Nov. 3 election, in which U.S. President Donald Trump, trailing in the polls against his Democratic rival Joe Biden, has made a tough approach to China an important foreign policy platform.

While the Alipay payment app is currently unavailable for American users in the United States, according to a spokesperson for Ant, Trump administration officials fear the Chinese government could access sensitive banking data belonging to future U.S. users.

A powerful security panel known as the Committee on Foreign Investment in the United States (CFIUS) stopped its $1.2 billion bid to buy the money transfer company Moneygram in 2018 over national security risks.

The State Department did not respond to a request for comment. Ant, an affiliate of Alibaba (NYSE:BABA) Group Holding Ltd (HK:9988), declined to comment but in a recent statement to Reuters emphasized that only 5% of the company’s business is outside China.

“China opposes the U.S. abusing the concept of national security and its national power to oppress foreign countries. This is a bullying practice,” Chinese foreign ministry spokesman Zhao Lijian said in a regular briefing on Thursday.

“China will continue taking necessary measures to safeguard the legitimate rights and interests of Chinese companies,” he said.

The entity list, which makes it more difficult for U.S. firms to sell high-tech items to blacklisted companies, has become the tool of choice for the Trump administration to punish Chinese companies, though its real-world impact is sometimes questionable.

While curbing access to U.S. technology deals a blow to companies like Chinese telecoms giant Huawei Technologies, which was added in May 2019, its impact on a fintech giant like Ant is likely to be more symbolic and does not prevent U.S. investors from taking stakes in the firm.

The administration has been largely loathe to use tougher tools against China, such as freezing assets in the United States, which many attribute to Treasury Secretary Steve Mnuchin’s dovish stance on Beijing.

Ant’s Alipay payment platform, like Tencent’s WeChat platform, is used primarily by Chinese citizens with accounts in renminbi. Most of its U.S. interactions are with merchants accepting payment from Chinese travelers and businesses in the country.

Senator Marco Rubio, who has successfully urged the Trump administration to pursue investigations of Chinese companies, called last week for the U.S. government to consider options to delay Ant’s IPO.

The impact of such blacklisting on firms seeking an IPO is evidenced by the failure of Chinese artificial intelligence firm Megvii Technology to clear a hearing with the Hong Kong exchange last November, en route to a planned listing of $500 million.

The exchange sought more information from Megvii, including details of its suitability for a Hong Kong IPO, after the United States put it on a trade blacklist in October.

The U.S. End User Review Committee, which decides which companies to add to the list, includes the departments of State, Defense, Energy and Commerce. Defense and Commerce declined to comment while Energy did not respond to a request for comment.

However, approval for the IPO has been delayed. On Tuesday, Reuters reported China’s securities regulator is probing a potential conflict of interest in Ant’s planned stock listing.