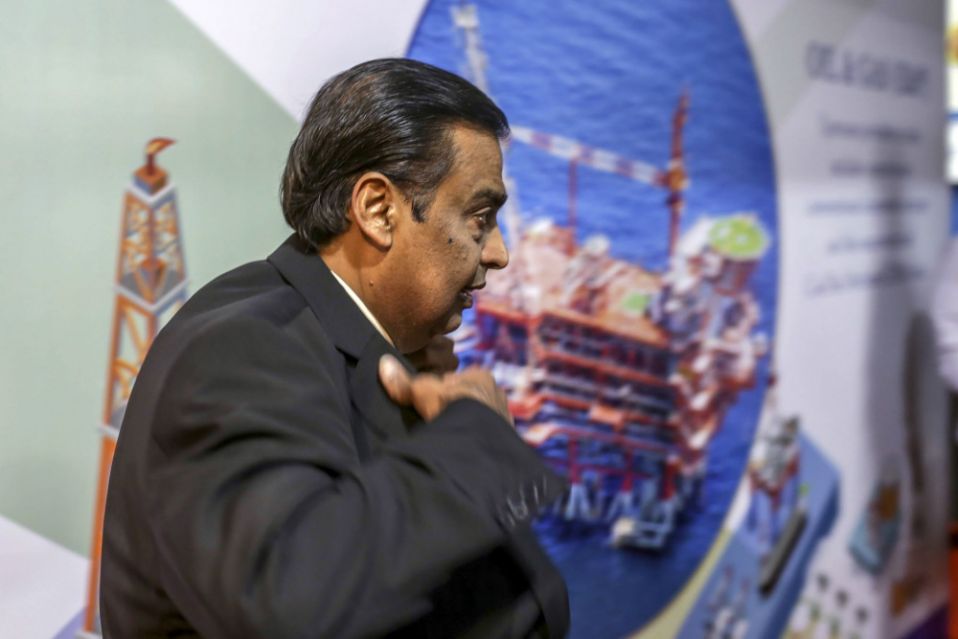 (Bloomberg) — Mukesh Ambani, Asia’s richest man, lost as much as $5 billion from his net worth as Reliance Industries Ltd.’s shares tumbled to the lowest price in more than three months following a drop in quarterly profit.

The stock of India’s most-valuable company fell as much as 6.8% in Mumbai on Monday as of 12:21 p.m., slipping the most since May 12 and touching the lowest since July 20. The benchmark S&P BSE Sensex only declined as much as 0.7%. The slide also shaved down Ambani’s wealth to about $73 billion to mark his worst day since March, according to the Bloomberg Billionaires Index.

Reliance’s oil refining unit has suffered a plunge in demand for transportation fuels, with Covid-19 forcing people to stay home. The conglomerate is in the midst of a transformation led by Ambani, 63, as he looks to turn the oil-and-petrochemicals giant into a technology and digital services company by bolstering its telecom and e-commerce businesses.

The slip in earnings backs Ambani’s strategy and highlights the increasing need for Reliance to reduce its dependence on the energy sector and boost businesses that seek to leverage India’s billion-plus consumers.

Reliance’s gross refining margin — or profit from refining a barrel of crude oil into fuels — fell to $5.7 per barrel in the latest quarter compared with $9.4 a year earlier, the company said. Meanwhile, the profit at its telecom business under Reliance Jio Infocomm Ltd. nearly tripled over the same period.

Reliance shares have rallied about 29% this year, while Sensex has slipped 4%, as investors cheered Ambani’s fundraising spree that saw Reliance mop over $25 billion by selling stakes in its digital and retail units. The jump also triggered one of the biggest wealth surges as Ambani amassed $19.1 billion in 2020 through Friday, becoming the world’s sixth-richest person, according to the Bloomberg Billionaires Index.

“The stock is correcting a part of its sharp gains registered over the last few months,” said Arun Kejriwal, founder at KRIS, an investment advisory firm in Mumbai. “Now, the market is booking its profits.”

(Updates with analyst comments in the last paragraph.)

For more articles like this, please visit us at bloomberg.com

Subscribe now to stay ahead with the most trusted business news source.