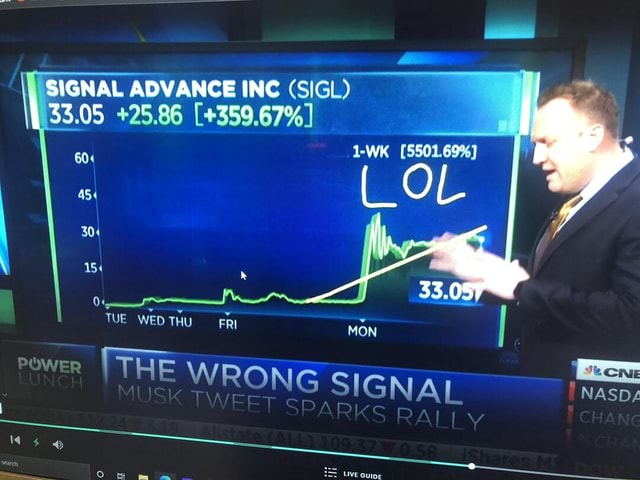 Shares of the company at one point late last week were up 1,500% over a 24-hour period. The insane move brought Signal Advance’s market cap to $100 million from $7 million during that stretch. Note before this, the company could be classified as a penny stock (sub $5 a share). The wild move to the upside follows a Jan. 7 tweet from Tesla founder Elon Musk to “Use Signal.”

What Musk was referencing, however, was for people to use WhatsApp rival messaging platform Signal. That Signal is not a public company. And Signal Advance was clearly not top of mind for Musk.

Despite the likely once in a lifetime move higher, Signal Advance insiders apparently didn’t sell a lick of stock.

“Neither the company, nor any director/officer of Signal Advance, Inc. sold any stock during the stock price increase that occurred from January 7 to January 12, 2021,” a spokesperson told Yahoo Finance via email on Wednesday.

Perhaps a wee bit strange course of action all things considered. Shares of Signal Advance have crashed 880% from their speculative high on Jan. 11. The stock fell nearly 20% alone Wednesday.

Nonetheless, Signal Advance executives appear to be welcoming the attention.

“Dr. Chris M. Hymel, the Company CEO, congratulates the “SIGNAL” App developers on their success,” the company said in a statement sent to Yahoo Finance. “SIGL has no association with ‘Signal,’ the entity, or platform, referred to by Mr. Musk. The entities have no relationship to each other and Mr. Musk is not, to the best of our knowledge, a shareholder of SIGL.”