The technicals are turning higher for shares of ZM stock

Zoom Video Communications (NASDAQ:ZM) took the globe by storm last year, but as is often the case, its stock price got too far over its skis. Earnings ballooned, but apparently not enough to allow ZM stock to remain at its lofty $588 perch. The fourth quarter ushered in an epic rug-pull that saw the stock tumble 43% from its peak.

The compelling fundamental narrative remains, however. While the world will slowly return to the workplace throughout 2021, Zoom should remain the top dog in its industry. The million-dollar question is whether the nearly halving of its share price was enough damage to work off the excess and return ZM to a more palatable price.

Rather than focus on fundamental metrics to make the call, I prefer to let the stock chart be my guide. Institutions returning and a fresh uptrend taking root are the two signals I desire. And guess what? We just got them both.

We need one more resistance zone to give way, then the bulls’ foothold will be assured.

Let’s take a closer look at the chart.

Let’s start with the bigger picture for context. Note Zoom’s meteoric rise and the accompanying surge in volume last year. Investors stuffed themselves silly with profits until, at a richly priced $588.84, the crowd finally woke to the idea that their zeal had zipped prices a wee bit too high. And then, the comeuppance arrived. 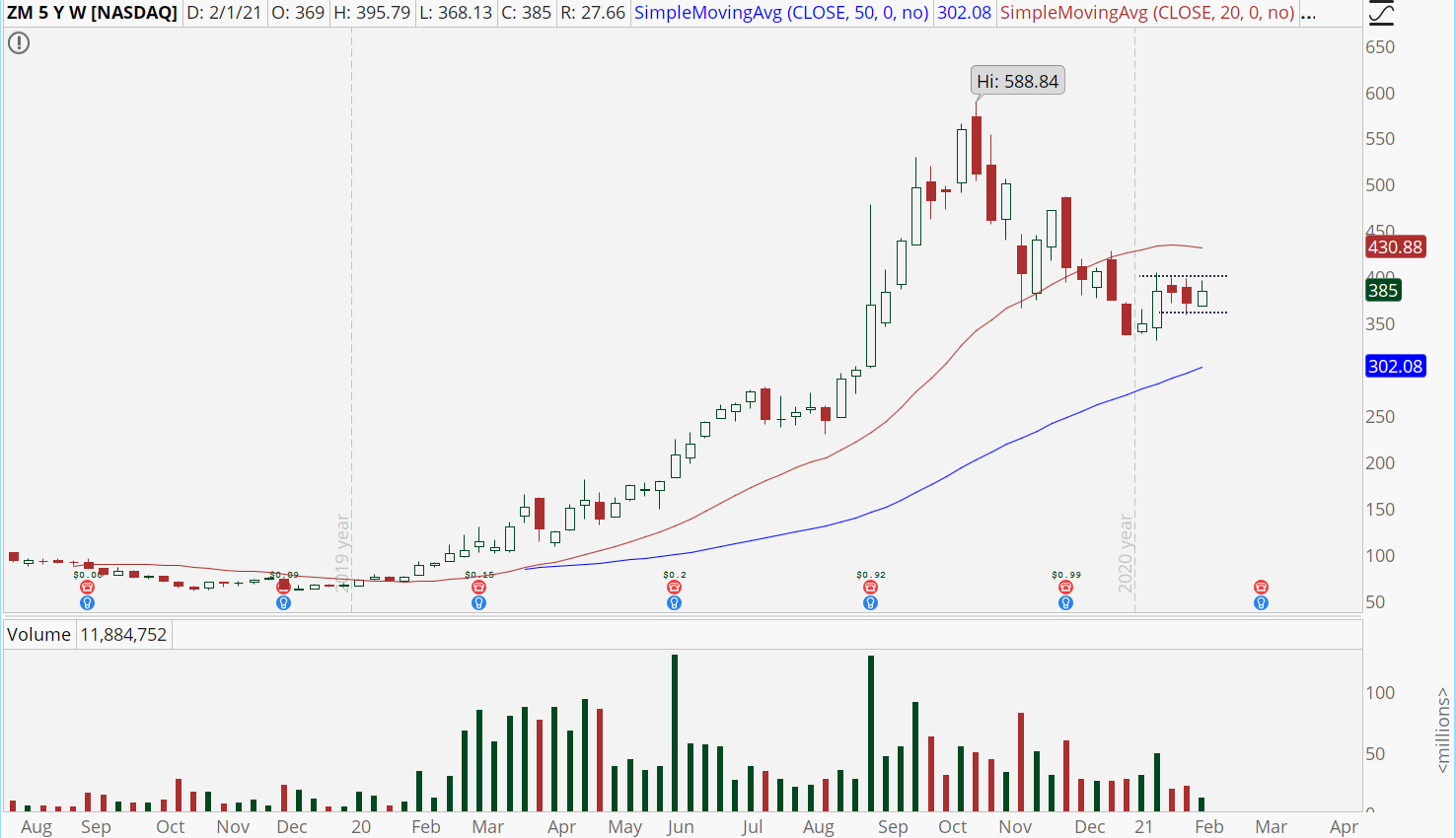 The 43% decline broke both the rising 20-week moving average and a weekly pivot low, but it stopped short of completely retracing the prior weekly advance. For that reason, this can still be viewed as a longer-term buying opportunity. Some bargain hunters no doubt would have preferred a deeper drop, but with the daily chart firming up, this may be as good as it gets for now.

The daily view shows both positive signals mentioned above in greater detail. Let’s start with the buying influx from Jan. 12 to Jan. 15. We had four consecutive accumulation days jam prices up to the falling 50-day moving average. The fact that the runup created a false support break is also bullish because it trapped short-sellers. If we saw ZM stock quickly sink after the runup, perhaps the bearish view would still stand, but we didn’t. 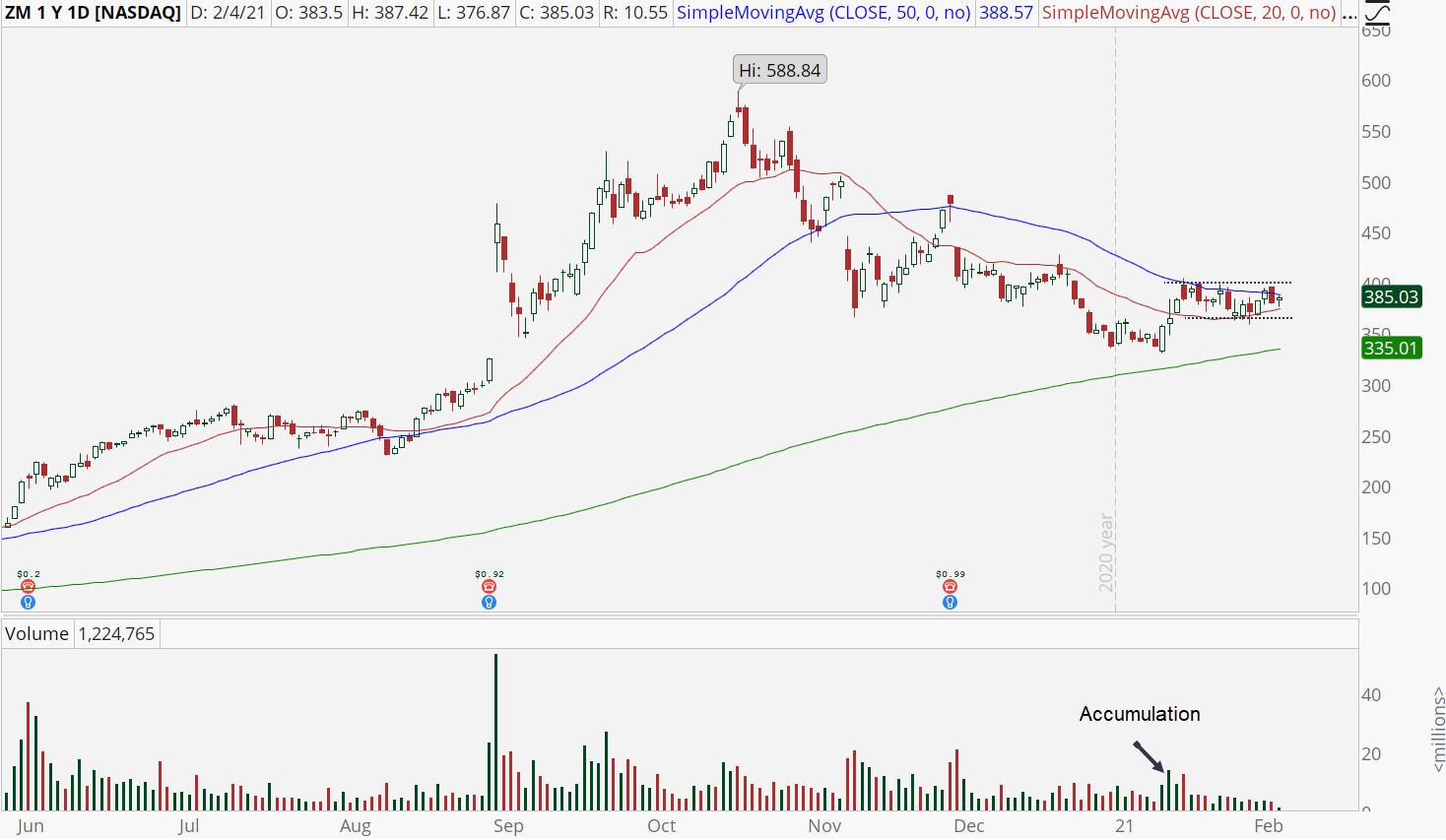 Instead, a higher pivot low formed at the 20-day moving average. Taken together, the past three weeks have formed a constructive sideways base with obvious resistance overhead at the psychologically significant $400 level. This provides a clean entry point or trigger for the next advance. The next two ceilings sit at $430 and $450, so consider those your upside targets.

Bull Calls for the Win

Spectators looking for a longer-term play could obviously buy the underlying shares if they break out.

However, if you’re looking for a cheaper, more leveraged route, then I suggest bull call spreads. You can better fine-tune the cost by widening or shrinking the spread width. We’ll start with a $20-wide version to illustrate.

The risk is limited to your initial $8 cost and will be forfeit if ZM stock sits below $400 at expiration. Of course, if you exit earlier, such as on a break of support, then your loss will be far less. The potential reward is $12 (spread width – cost) and is yours to keep if ZM sits above $420 at expiration.

On the date of publication, Tyler Craig did not have (either directly or indirectly) any positions in the securities mentioned in this article.

For a free trial to the best trading community on the planet and Tyler’s current home, click here!