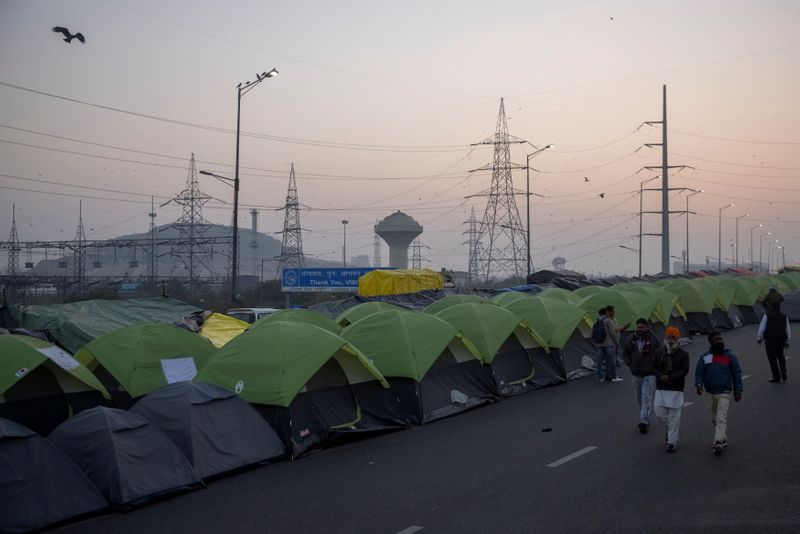 NEW DELHI (Reuters) – Indian farmers who have been protesting for months against deregulation of produce markets plan to block a major expressway outside New Delhi on Saturday, the 100th day of their campaign, they said.

Tens of thousands have been camped outside Delhi since December, demanding Prime Minister Narendra Modi repeal three farm laws that open up the country’s agriculture markets to private companies, which the farmers say will make them vulnerable.

Farmers from the northern states of Punjab, Haryana and Uttar Pradesh plan to stop all traffic on the six-lane Western Peripheral Expressway that forms a ring outside New Delhi for up to five hours, union leaders said on Friday.

“We believe that after these 100 days, our movement will put a moral pressure on the government to accede to our demands, because the weather will also worsen,” said Darshan Pal, spokesperson for the farmer unions’ coalition Samyukta Kisan Morcha (SKM), or United Farmers’ Front. “It will weaken the government, which will have to sit down with us to talk again.”

The government says the reforms will bring investment to the antiquated agriculture markets, and that new entrants would operate alongside government-regulated market yards, where farmers are assured of a minimum price for their produce.

Several rounds of talks between the government and farm leaders have failed and the movement has gained widespread support, including from international celebrities, posing one of the biggest challenges to Modi since he took power in 2014.

As the harvesting season begins this month, Pal said neighbours and friends back in the villages would help tend to farms while he and other farmers carry on the protests.

The capital typically has harsh summers with temperatures rising up to 45 degree Celsius, but Pal said that won’t hinder the movement.

“The laws are like a death warrant to us,” he said. “We are prepared for the long haul.”Indian farmers plan major road blockade outside Delhi to mark 100th day of protests