Sometimes, things don’t work out “exactly” as we plan. Such was the case last week, as we had expected a reflexive rally following the selloff previously. As noted in last weekend’s post:

We do expect that market will likely muster a short-term oversold rally next week. However, the risk of a continued correction in March is likely if money flows deteriorate further. It is advisable to use any rallies to reduce equity risk and rebalance allocations accordingly.”

While we did get the expected rally on Monday, it immediately reversed. The middle of the week was rather brutal to the previous “momentum” trade. Such did not give investors much ability to rebalance without “panic selling” the low, which occurred Friday morning.

The good news is Friday’s mid-morning reversal did manage to keep the S&P above the 50-dma support level and money flows positive, albeit just barely. While the money flow index deteriorated further this week, and as we suspected, it is now rather profoundly oversold.SPY Daily Chart

More importantly, while the short-term money flow index is very oversold, the longer-term index remains on a confirmed sell signal. Such suggests that downward pressures remain for now, and any reflexive rally should get used for rebalancing risks.SPY Weekly Chart

The dichotomy between the daily and weekly charts suggests we may well see a rally in the short-term, but another correction following. The last time we had the current setup with our indicators was in September and October of 2020, which provided two 10% corrections before the consolidation process was over. 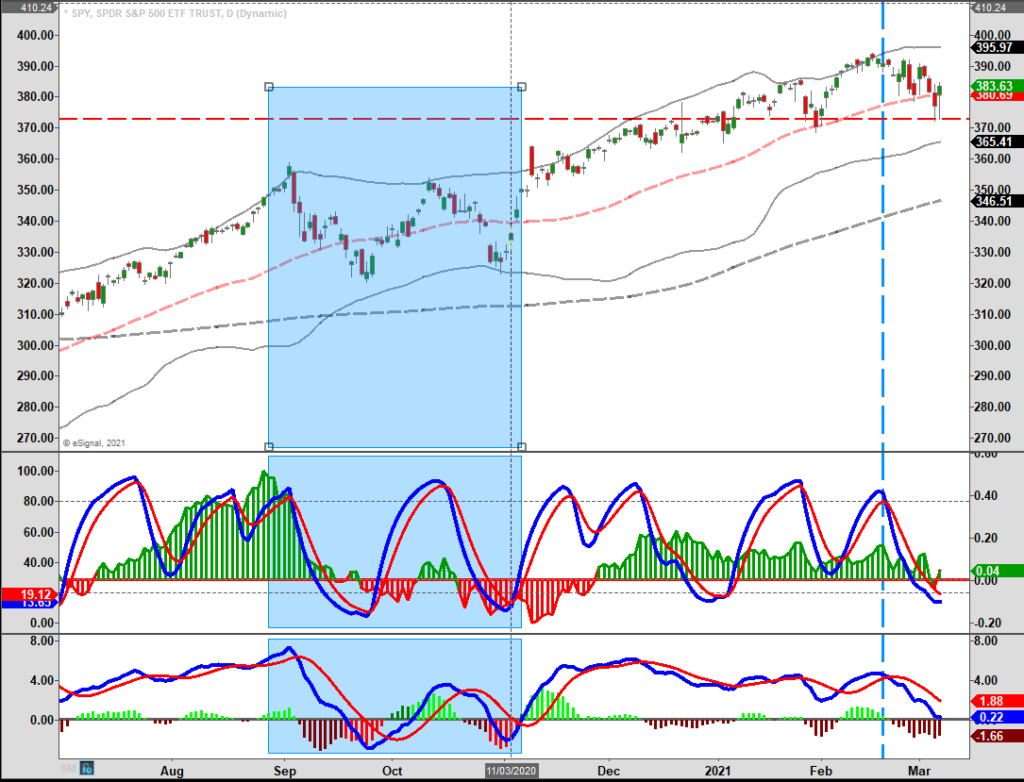 We continue to suggest some caution. Despite media claims to the contrary, higher interest rates will matter, as we will discuss next. More importantly, they tend to matter a lot.

On Thursday, Chairman Powell spoke, and the bond and stock markets listened closely. Higher yields are becoming a headwind for stock prices. The biggest question on investor’s minds is when the Fed will stop bond yields from rising?

We suspect the Fed will take a page from the Ben Bernanke playbook and audible to “Operation Twist.” sooner than later. Michael Lebowitz is writing an article on this issue which we will release next Wednesday. However, this “sneak-peek” may prove useful to our analysis today.

“The Fed must be keenly aware rising interest rates will choke off the fledgling economic recovery. The likely solution to keeping the recovery rolling dates back to the 1960s when Chubby Checker and the Twist were all the rage.

As interest rates rise, the odds of Operation Twist 3.0 increase. The Twist can arrest rate increases without altering the current QE pace of $120 billion per month. The alternative option, increasing the amount of QE, might cause rates to climb further due to the inflationary implications of such actions. The Twist allows them to manipulate markets without increasing their footprint.

Operation Twist may be bullish for equity and fixed income markets but we must ask: will investors dance with the Fed or will they fear something is not right?” – Michael Lebowitz

While I agree with Mike on the initiation of “Operation Twist,” it is not because it is “AN” option; it is the “ONLY” option the Fed has.

To understand why the Fed is trapped, understanding what is happening with “real” rates is critical.

The Fed Is Making The Same Inflation Mistake

On Thursday, Mish Shedlock penned an essential piece on inflation.

“Prior to 2000, home prices, Owners’ Equivalent Rent (OER), and the Case Shiller national home price index all moved in sync. This is important because home prices directly used to be in the CPI. Now they aren’t. Only rent is. Yet, OER is the single largest CPI component with a hefty weight of 24.05% of the entire index.

The BLS explains this away by calling homes a capital expense, not a consumer expense.

“Year-over-year, the CPI is only up 1.4%. The OER is up 2.0%, but the Case Shiller National Home Price Index (December) is up a whopping 10.3%. If we substitute actual home prices for OER (as the CPI used to be calculated), the next chart shows what CPI would look like. I call the substitution Case-Shiller CPI (CS-CPI).”

However, the CS-CPI has been running between 2% and 3% for the past three years and most of the past seven years. By this measure, the Fed has already achieved its goal. Yet, the Fed is holding rates near zero and has pledged to remain that way. 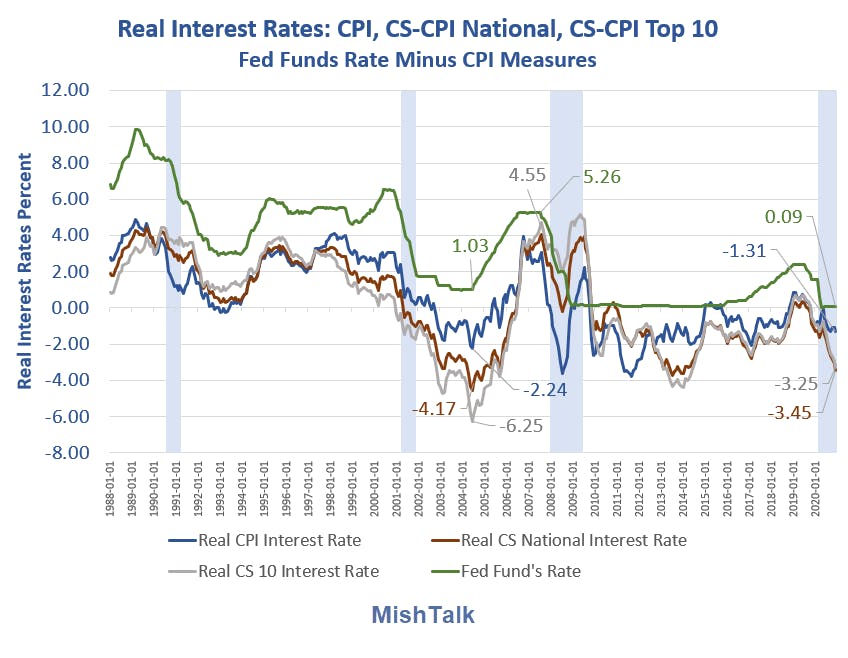 “With the real interest rate at -3.45% is it any wonder speculation in stocks, junk bonds, and housing are rampant? This is the same mistake the Fed made between 2002 and 2007 when it ignored a blooming housing bubble with dire consequences culminating in the Great Recession.”

The Fed Is Trapped

“Worst of all, in their attempts to fight routine consumer price deflation, central bankers, led by the Fed, create very destructive asset bubbles that eventually collapse, setting off what they should fear – asset bubble deflations.”

He is correct. However, because the Fed kept rates at zero for nearly a decade and inflated asset prices by injecting monetary liquidity, the hopes such would spark economic growth. As we noted previously, this is Ben Bernanke’s goal from 2010:

The problem is the Fed is trapped.

As seen in 2018, when the Fed does try to tighten monetary policy, such immediately causes a bond market tantrum and a stock market crash (via SPY).SPY Daily Chart

Such is the case today. With inflation expectations surging, such suggests the Fed should start hiking rates and reducing bond purchases. However, if they did that, the market will crash, further impeding consumer confidence which barely rose from the 2020 lows.Consumer Confidence Composite Index Chart

Given that economic growth is debt-supported, rate increases have an almost immediate negative impact. While the Fed may not be discussing a “tightening monetary” policy, the bond market is doing it for them.

Eventually, market forces will do the job for them via surging inflationary pressures and a destabilized bond market.

It will be known as the “Great Financial Crisis 2.0.”

Last week, I discussed that we were starting to see “topping patterns” across various markets. To wit:

“With the market getting back to more oversold levels, we are likely to see a counter-trend rally for a few days that could get us back above the 20-dma. It will be necessary for the rally to set new highs to negate the “head and shoulders” pattern. If the market rallies, fails, and breaks the neckline, we could well see a deeper correction ensue.”

I have updated the chart above for this week’s action.

As you will notice, we did indeed rally, then failed and tested support. The risk of a more extensive correction was averted short-term with support at the neckline and 50-dma holding.SPY Daily Chart

There is an essential caveat to this analysis.

The start of “head and shoulder” patterns occurs with quite some regularity during an advancing market. However, they are quite often not completed as the market moves to new highs negating the pattern. Therefore, while we are pointing this pattern out, we are not saying the market is about to go lower. Such will only be if the pattern completes with a break of the “neckline” support.

Currently, the market must establish support and rally to new highs to negate the risk of a more significant correction.

We have been cautioning over the last couple of weeks about rising market risks. While we reduced our equity allocations and drastically shortened our bond durations, I wish we had done even more in hindsight.

With the markets deeply oversold on a very short-term basis, we will likely see a reflexive rally next week. As stated last week:

It is essential not to react emotionally to a sell-off. Instead, fall back on your investment discipline and strategy. Importantly, keep your portfolio management process as simplistic as possible.

While this may indeed turn out to be a buying opportunity in the short-term, mainly if the Government passes the next “stimulus bill,” cleaning up your portfolios allows you to adjust to the markets next advance.

It will also protect you just in case “something else” happens.Market Stumbles As Rising Rates Undermine Outlooks