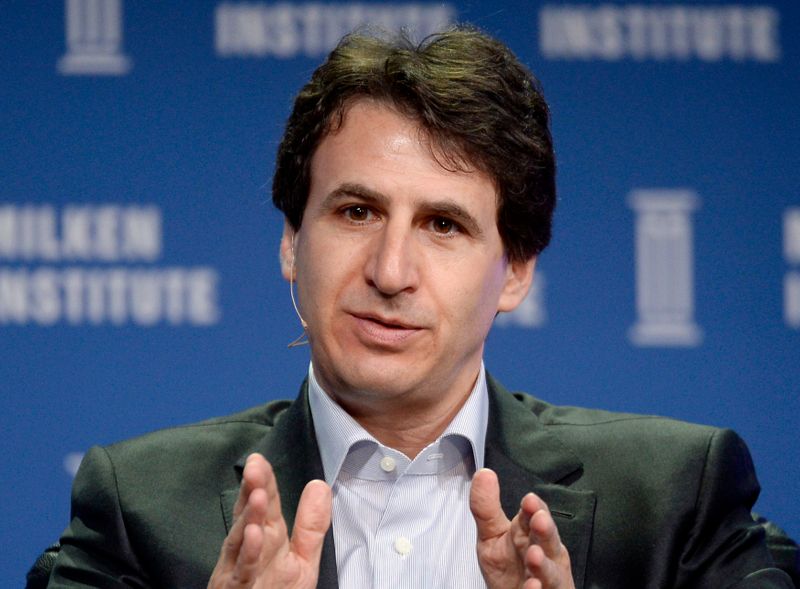 © Reuters. Marc Rowan takes part in a panel discussion of Credit Markets: What’s Next? during the 2014 Milken Institute Global Conference in Beverly Hills

(Reuters) – Apollo Global said on Monday it would buy Athene Holding (NYSE:ATH) in an all-stock deal valuing the annuities provider at about $11 billion, making it the private equity firm’s first major deal after co-founder Leon Black stepped down as CEO.

The deal will create a company with a pro-forma market value of $29 billion, providing products and services in the investment and retirement income space.

The combined company will be led by incoming Apollo Chief Executive Officer Marc Rowan. The deal is expected to close in January 2022.

Rowan, who co-founded Apollo 31 years ago, has been tasked with running the company after Leon Black said in January he would step down as chief executive, following an independent review of his ties to the late financier and convicted sex offender Jeffrey Epstein.

Black continues to be Apollo’s chairman.

Under the terms of the deal, each outstanding class A common share of Athene will be exchanged for 1.149 shares of Apollo common stock, representing a premium of about 16.5% to Athene’s closing share price on Friday.

The company’s shares were up nearly 19% in premarket trade, while Apollo was up 4.7%.

Existing Apollo shareholders will own about 76% of the combined company, and Athene investors will own the rest. Apollo is already Athene’s largest shareholder with an almost 29% stake, according to Refinitiv data.

Apollo also said that the conflicts committee of its board has approved changes that would result in a simpler, more transparent corporate structure that is expected to be put in place by January 2022.

The company had entered into a binding governance term sheet with Black, Rowan and co-founder Josh Harris to make changes to its governance structure and a timeline for their implementation.

Under the terms, Apollo’s board of directors will be increased to 15 members, with three additional new independent directors appointed.

The private equity firm said last month it would look into changing its corporate governance structure, getting rid of shares with special voting rights that currently give Black and other co-founders effective control of the firm.

Founded in 2009, Athene also serves as Apollo’s partner insurance company and had total assets worth $202.8 billion at the end of 2020, with operations in the United States, Bermuda, and Canada.Apollo Global to buy annuities provider Athene in $11 billion deal Add a Comment