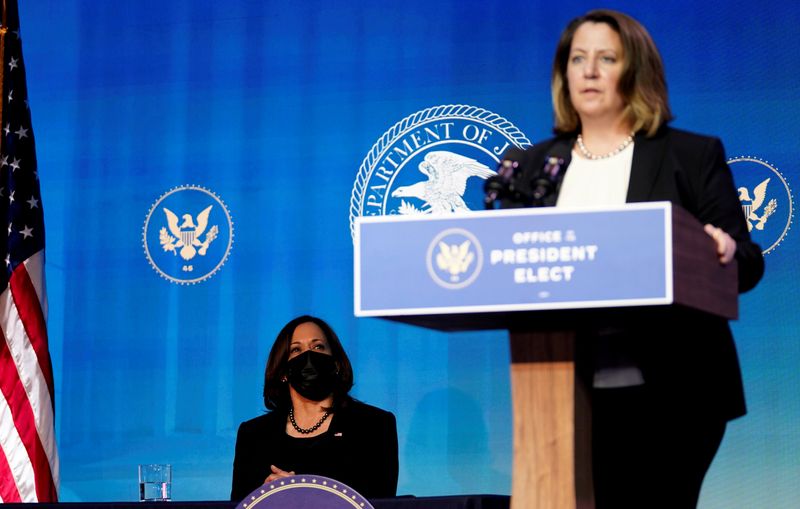 WASHINGTON (Reuters) – In her first big civil rights case after law school, Vanita Gupta two decades ago challenged the wrongful drug convictions of dozens of Black residents of the Texas Panhandle city of Tulia, all of which hinged on faulty testimony by an undercover police officer with a checkered past.

Gupta, then a junior lawyer with the NAACP Legal Defense Fund, went toe to toe with the local prosecutor. But she nonetheless managed to charm him so much that he sent her friendly emails with his daily morning thoughts, other members of the defense team recalled.

“We were saying it was prosecutorial misconduct, and misconduct by the sheriff’s department that should get all these folks out of prison … and meanwhile he is sending her his inspiring morning email,” civil rights attorney Jennifer Klar, a friend of Gupta, said of the case.

The governor of Texas eventually issued pardons for Gupta’s clients. Gupta is now President Joe Biden’s nominee to serve as associate U.S. attorney general, the Justice Department’s No. 3 job. Her powers of persuasion and ability to win over adversaries will be put to an important test this week.

Gupta is set to go before the Senate Judiciary Committee for a confirmation hearing on Tuesday along with Lisa Monaco, Biden’s nominee for the Justice Department’s No. 2 job. Gupta has drawn opposition from some conservatives, including the Judicial Crisis Network activist group, and is believed to face a tougher confirmation battle than Monaco in the closely divided Senate.

Law enforcement organizations including the Fraternal Order of Police and some high-profile conservatives including Grover Norquist have urged the Senate to confirm Gupta.

‘HEART OF A LION’

Monaco has drawn endorsements from figures in both parties, notably including Republican former attorneys general Alberto Gonzales and Michael Mukasey.

“We come from different political perspectives,” said Cliff Stricklin, a Republican attorney and partner with the law firm Bryan Cave Leighton Paisner, who said he got to know Monaco when they worked together on a team that prosecuted executives from the defunct energy company Enron.

“She has the heart of a lion,” Stricklin said. “When I saw she was nominated for the position of deputy attorney general, I thought she is the perfect person at the perfect time for that role.”

Gupta and Monaco are expected to face questions from senators on topics ranging from civil rights enforcement to how the Justice Department will protect against future attacks by domestic extremists.

If confirmed as deputy attorney general, Monaco would oversee the Justice Department’s criminal and national security matters and play a vital role in formulating criminal justice policies. She would help oversee the department’s sprawling investigation into the Jan. 6 attack on the U.S. Capitol by a mob of former President Donald Trump’s supporters.

Now with the law firm O’Melveny & Myers, Monaco served as former President Barack Obama’s homeland security and counterterrorism adviser and has extensive experience as a prosecutor and attorney on national security matters.

In addition to serving on the government’s multi-agency task force that focused on wrongdoing by Enron after its 2001 collapse, Monaco worked at the FBI advising its former director Robert Mueller and later served as assistant attorney general in the National Security Division from 2011 to 2013 under Obama.

The road for Gupta may be rockier.

Gupta became a Trump critic when she served as head of the Leadership Conference on Civil and Human Rights advocacy group.

The Judicial Crisis Network recently starting running a television ad incorrectly claiming Gupta told Reuters in a article last June that she supports defunding police – a statement she did not make.

Defending Democracy Together, an anti-Trump Republican group, has launched its own campaign to back Gupta’s nomination, running ads targeting senators seen as swing votes including centrist Democrat Joe Manchin, and launching a website called ConfirmingGupta.com.

“The breadth of her support is quite deep and unique,” said Wade Henderson, who took over as interim head of the Leadership Conference on Civil and Human Rights after Gupta’s nomination. “She is a proven consensus-builder.”Biden’s picks for key Justice Department posts face confirmation scrutiny Add a Comment