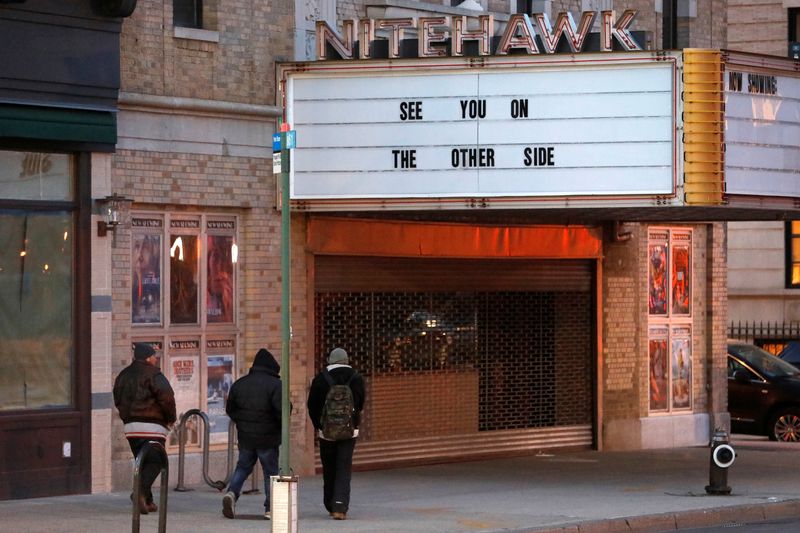 © Reuters. People walk by the Nitehawk cinema, which closed due to the coronavirus disease (COVID-19), in Brooklyn, New York City

By Saundra Amrhein and Alexandra Ulmer

DUNEDIN, Florida/SAN FRANCISCO (Reuters) – From the crack of the baseball bat in Florida to clinking of cocktails in San Francisco bars, the sounds of spring are in the air as Americans start to return to many of the beloved pastimes they were forced to abandon 12 months ago.

With cities and states loosening restrictions as new COVID-19 cases recede and the rollout of vaccines accelerates, people are enjoying a taste of their old lives again.

Over the past weekend, New Yorkers watched movies on the big screen, San Franciscans dined indoors, and baseball fans cheered on their favorite big-league players as spring training resumed in Florida.

“You can feel how it’s not as tense or stressed. People are feeling a sense of relief,” added Skelton, muffled by his mask.

He isn’t the only one feeling upbeat.

In just one month, the mood in the United States has rebounded from an eight-year low to the highest level recorded by Reuters/Ipsos polls that date back to 2012.

In North Carolina, college students whose university experience was rocked by the pandemic drew solace from watching a basketball game between UNC-Chapel Hill and Duke University men’s teams, only the second game this season with spectators.

“Everyone was saying we would rather come to this than graduation,” UNC-Chapel Hill college senior Charlotte Wirtz said on Saturday night. “It doesn’t make up for losing a whole year. But this would be the one thing we’d be the most upset about missing.”

To be sure, the pandemic, which has killed more than half a million Americans, is far from over. In fact, some health experts are warning that a decline in new cases is leveling off and potentially more virulent variants are spreading just as restrictions ease.

Even as the U.S. government distributed more than 110 million vaccine doses and put shots into over 57 million arms, according to federal data, the country is still recording upwards of 60,000 new COVID-19 cases daily.

Against that backdrop, President Joe Biden said decisions by the Republican governors of Texas and Mississippi last week to order complete rollbacks of their mask mandates and other COVID-19 mitigation measures amounted to “Neanderthal thinking.”

While his administration is urging vigilance, its tone is decidedly optimistic. Last week the president said the United States will have enough vaccine to inoculate all adults by May, months ahead of his earlier forecast.

To get a read on the mood of the country, Reuters reporters fanned out this weekend to talk to Americans as they began to enjoy some of life’s simple pleasures again.

In San Francisco, where the city allowed indoor dining for the first time in months, patrons quickly found their way back under the colorful lights of the Beaux bar in the Castro neighborhood, a center of gay culture.

“The dream is real,” software engineer Brian Kennedy, 36, said as he nursed a bourbon by the bar on Friday night. “It feels relaxing and slightly normalizing.”

At tables around him, old friends huddled to catch up and compare notes on their vaccination experiences, while couples debated what restaurants they wanted to visit next.

“I hope to go out tomorrow night for dinner,” said hairdresser Michael Hollis, 68, as he caught up with friends of 50 years. “I go out whenever I can. After the second shot, I just feel safer.”

Of course, it was not entirely business as usual.

In Chicago, freelance worker Knyckolas Davis was relieved to be able to celebrate his 35th birthday out at Rizzo’s Bar & Inn, across the street from Wrigley Field ballpark, but he could not help longing for full normality.

“I still cannot wait for everyone to be in a room, smiling, happy and not worrying about anything else but being in the moment,” said Davis, as dance music blared in the background and college basketball games aired on flat-screen televisions.

Chicago bars and restaurants remain restricted to 50% capacity and must close by 1 a.m.

In New York City, cinemas re-opened on Friday after nearly a year, giving the city’s legion of film fans a chance to catch a movie from somewhere besides their living room couch.

Movie houses opened to 25% capacity, with no more than 50 people per screen, following state guidelines. Tickets quickly sold out at many venues.

For film student Noah Nemeroff, 22, just seeing a big screen again was a sign of hope.

“It’s like a reminder that things are going to get better,” Nemeroff said, after purchasing a ticket on Friday night for “Minari” at Manhattan’s independent movie theater Angelika.From Florida to ‘Frisco, Americans flock to movies, bars and ballparks after winter of worry