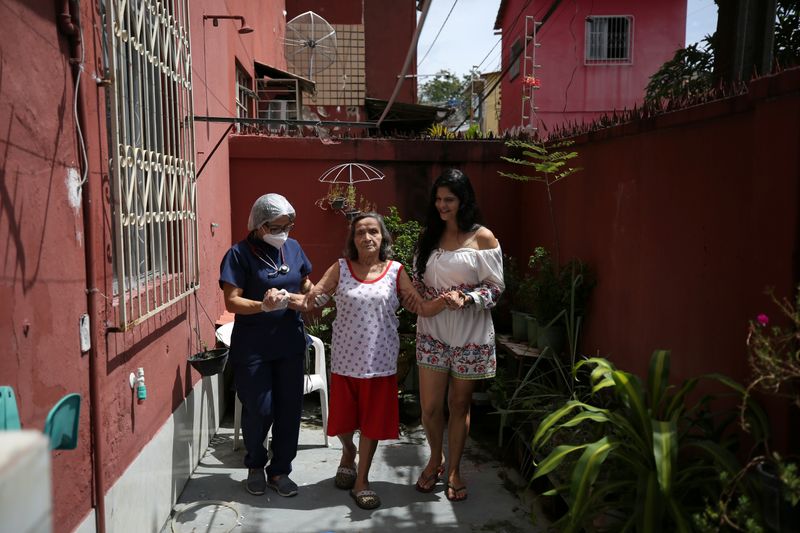 © Reuters. With fragile welfare systems, Latin American forced into debt to save their loved ones, in Manaus

By Daniela Desantis and Carlos Valdez

ASUNCIÓN/LIMA (Reuters) – Sandra Contreras, camped outside Lima’s Villa el Salvador hospital, is running out of funds to pay for her mother’s COVID-19 treatment, a sign of thin welfare systems around Latin America that are dragging many into debt and poverty.

“I have pawned all my things,” Contreras, 34, told Reuters between tears outside the hospital, where she has set up a hammock as she waits for news of her mother, infected amid a resurgence of coronavirus cases in the Andean nation.

“I said to my siblings: ‘What do I care if we have to sell the house to save my mother? We are going to do it.'”

Latin America, where countries are seeing a mix of reopening and new waves of COVID-19, has been hard hit by the pandemic, with 22 million people pushed into poverty and weak social safety nets, an annual U.N. report said on Thursday.

It said the number in extreme poverty was at a level not seen for 20 years, and it pointed to deep structural inequalities, a sprawling informal labor market and a lack of effective health care coverage – meaning many people end up paying for treatment out of pocket.

In Paraguay, that has sparked a wave of informal fundraising, with bake sales and short-term loans as family members seek to meet the costs of medical care.

Mirta González, a 34-year-old manicurist from a small town in southern Paraguay, took an express loan when her husband Jesús got sick and was transferred to the capital Asuncion. She spent 6.5 million guarani ($985) on medications and supplies.

“Here without contacts or money you will die,” González told Reuters while waiting to be called by a loudspeaker to deliver medicine to her husband at INERAM, the main COVID-19 treatment center in the country.

In the landlocked country of some seven million people only around one in five have social security and heath cover via their jobs, and only around 7% pay for private cover, government data show. Free state care is open for all but is very limited.

In the Brazilian city of Manaus, where a surge in COVID-19 case in January led to a collapse in public health services, Cintia Melo was forced to look after her 87-year-old mother at home, hiring carers and a ventilator, and renting or buying oxygen cylinders.

“There were absolutely no hospital beds at all,” the freelance video producer said by telephone. She said it was costing about 20,000 reais ($3,553) a month and, even though her mother was now recovering, she would still need care for several more weeks, maybe months.

Verónica Serafini, an economic researcher in Paraguay, said health expenses were the main driver pushing people into debt and this would snarl a revival of growth after the pandemic eased, key as the commodities-rich region looks to bounce back.

“Instead of investing in a house, business or education, we are getting into debt for health. And there’s no possibility of growth if people lose assets when they get sick,” she said.

‘A BLOW NO-ONE WAS PREPARED FOR’

The wave of indebtedness comes as millions of Latin American families grieve loved ones who died during the pandemic. The region has recorded more than 687,000 confirmed COVID-19 deaths, a Reuters tally shows, second only to the death toll in Europe.

Renata Granados, 24, and her family in Querétaro, Mexico, were forced to sell the family pick-up truck in a raffle after her sister Paloma got infected and died after 21 days in hospital. The bill was 7 million Mexican pesos (about $330,000).

“The expenses were very large when she was in the hospital and we had to find a way to raise funds,” said Granados, who herself is training to be a doctor. She said her sister had been an inspiration.

“I feel like it was a blow that no one was prepared for.”

The report last week by the U.N.’s Economic Commission for Latin America and the Caribbean said that in addition to rising poverty the pandemic had caused growing social tensions.

But it said things would be worse without measures taken by Latin American governments to transfer emergency income to some 84 million households, or about half the population.

The commission’s executive secretary, Alicia Bárcena, said people were living through heightened uncertainty due to the pandemic and that “it is necessary to build back with equality and sustainability, aiming to create a true welfare state, a task long postponed in the region.”

Back in Peru, 26-year-old Yoselin Marticorena waited outside the Villa el Salvador hospital for news about her father. Her mother and sister also had COVID-19 symptoms and she said there was no one left to help support her.

“I don’t know what to do, I truly sold everything already,” she said amid pitched tents outside the hospital. “I already got into debt. I have no one else to ask for help.”‘Sell the house’: Latin Americans beg and borrow to pay COVID-19 debts