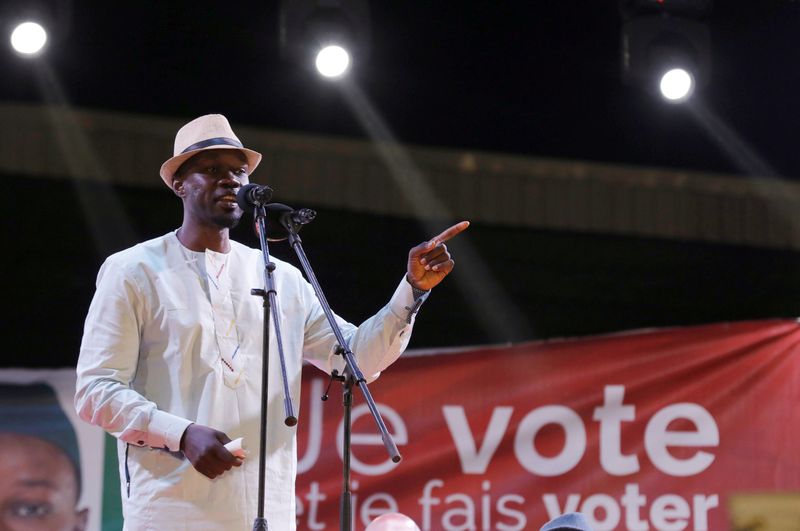 DAKAR (Reuters) – Senegal opposition leader Ousmane Sonko was indicted and released on bail under judicial supervision on Monday, his lawyer said, as he faces a rape accusation that has sparked violent protests.

Sonko’s release could help ease tensions that have buffeted one of West Africa’s most stable democracies in the past week, leaving at least eight dead in clashes between protesters and police, right group Amnesty International said on Monday.

“He (Sonko) has been indicted for rape and death threats and placed under judicial supervision. He is going home,” Sonko’s lawyer, Cheikh Koureyssi Ba, told Reuters.

Several hundred people gathered outside the courthouse waving flags and chanting “Free Sonko” on Monday morning before beginning to march. His supporters have called for three days of nationwide protests this week.

Much of Senegal’s capital Dakar was at a standstill in anticipation of further unrest, and army tanks patrolled downtown streets.

Sonko, who finished third in the 2019 presidential election, was arrested after an employee of a beauty salon accused him of raping her. He denies the allegation and says it is an attempt by President Macky Sall to kneecap a political rival.

The government denies this.

Kindled by Sonko’s arrest, the protests have grown into the worst political unrest the country has seen in years as youth vent frustrations about unemployment, inequality and corruption.

Political pressure has risen on President Macky Sall, whose tenure has been plagued by accusations that he unjustly torpedoes political rivals and worries that he may seek to extend his rule beyond his allotted two-term limit.

“This is not only about Sonko. We want Macky to resign,” yelled one man marching in a crowd of people on Monday.

Many are suspicious of the accusations against Sonko because two other prominent rivals of Sall were previously targeted by criminal charges that prevented them from running for president in 2019.Senegal opposition leader indicted and released on bail Add a Comment