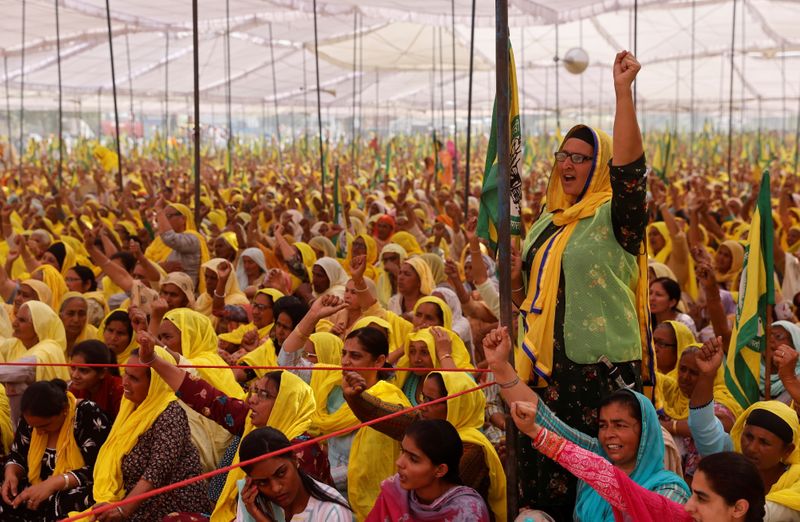 By Danish Siddiqui and Zeba Siddiqui

NEW DELHI (Reuters) – Thousands of women joined protests by farmers on the outskirts of Delhi on Monday to mark International Women’s Day, demanding the scrapping of new laws that open up agriculture produce markets to private buyers.

Since December, many farmers accompanied by their families have camped at three sites on the outskirts of the Indian capital to oppose the biggest farm reforms in decades, which they say hurt them.

“This is an important day as it represents women’s strength,” said Veena, a 37-year-old from a farming family, who gave only one name in order to protect her identity.

“I believe if us women are united, then we can achieve our target much quicker,” added Veena, who travelled from the northern state of Punjab to the sprawling Tikri protest spot.

More than 20,000 women gathered at the site near Delhi’s border with the state of Haryana, police and event organisers said.

“This is a day that will be managed and controlled by women, the speakers will be women, there will be a lot of feminist perspectives brought in, and discussions on what these laws mean for women farmers,” said farm activist Kavitha Kuruganti.

“It is one more occasion to showcase and highlight the contribution of women farmers both in agriculture in India as well as to this movement.”

Faced with the protests, Prime Minister Narendra Modi’s government offered to suspend the laws for 18 months, but the farmers have refused to back down, demanding their repeal.

Agriculture accounts for nearly 15% of India’s $2.9 trillion economy and employs about half its workforce.

Women farmers have as much at stake as men from the new laws, Kuruganti added.

“Markets that are distant as well as exploitative make single women farmers more vulnerable, and in any case a patriarchal society has discriminated and made them vulnerable.”Thousands of women join Indian farmers’ protests against new laws