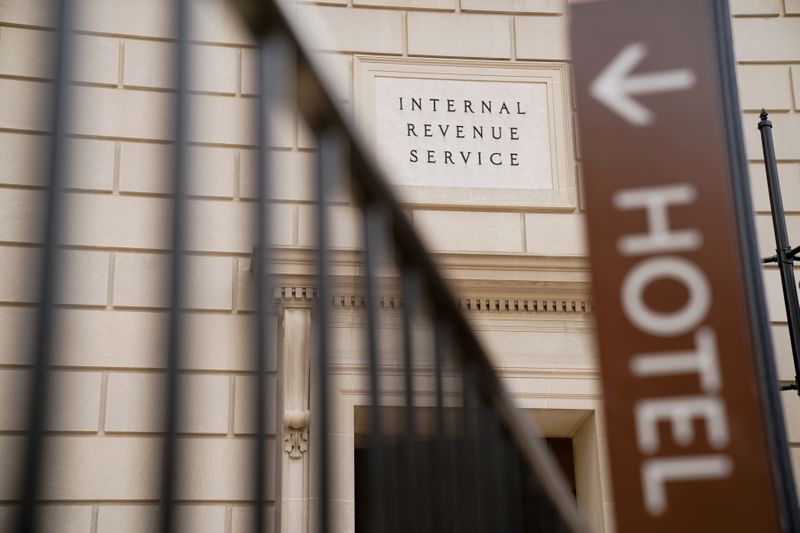 © Reuters. FILE PHOTO: The Internal Revenue Service building is seen behind a sign for the Trump International Hotel

WASHINGTON (Reuters) – With plenty of practice sending coronavirus relief payments to Americans, the federal government should be able to launch the delivery of $1,400 checks almost immediately once Congress finalizes the new aid bill and President Joe Biden signs it, tax experts say.

Some Americans might see direct payments as soon as this week if the bill passes the House of Representatives on Tuesday as expected, compared with several weeks’ lag in April 2020. Nearly 160 million households are expected to get payments, the White House estimates.

The Treasury Department’s Internal Revenue Service will have new challenges on its hands, though, thanks to the $1.9 trillion relief bill. Incarcerated people, those with non-citizen spouses and relatives of those who died in 2020 will be eligible for payments.

The bill also includes an expanded Child Tax Credit of up to $3,000 per child, paid monthly starting in July, essentially forcing the revenue collector to act as benefits administrator for the rest of the year.

The IRS, which has more than 70,000 employees, handles over 190 million individual and corporate tax returns a year, but it has been hobbled by budget cuts and obsolete technology in recent years. The COVID-19 bill includes $1.46 billion for the agency, which is running into its busiest season, as the April 15 deadline for individual taxpayers approaches.

A U.S. Treasury spokeswoman said the Biden administration’s priority was to speed relief to Americans, adding: “Treasury stands ready to implement the direct payment check program as soon as the American Rescue Plan is passed.”

Making one-off payments to those who regularly file tax returns should not be a struggle for the IRS, said Janet Holtzblatt, senior fellow with the Urban-Brookings Tax Policy Center.

“They have already ironed out many of the snafus that slowed the previous rollouts,” Holtzblatt said. “The IRS continues to surprise me in its ability to step up to these challenges.”

It took more than two weeks for the IRS to begin sending https://twitter.com/irsnews/status/1249062356077944832?lang=en the first $1,200 electronic payments to taxpayers in April 2020 after then-President Donald Trump signed the $2.2 trillion CARES Act into law on March 27. There was more than a three-week lag for paper checks, after changes were made to print Trump’s name on them.

The year-end $900 billion stimulus was signed by Trump on Dec. 27, a week after Congress passed it. The IRS began sending https://www.irs.gov/newsroom/treasury-and-irs-begin-delivering-second-round-of-economic-impact-payments-to-millions-of-americans electronic payments out two days later, on Dec. 29.

Biden left the IRS plenty of room after Senate passage on Saturday, saying his plan “would get checks out the door this month.”

But Democrats in Congress, including Senator Bob Casey, were more optimistic on Sunday. Payments will go out “in very short order,” Casey said. “The Treasury Department is prepared for this. They’ve been dealing with this issue since last March.”

Another key priority for the next round will be signing up more people for electronic payments, including those earning too little to file tax returns or who do not get other federal benefits, who were left out of past payment rounds.

Homeless people and those without internet access will be difficult to reach, but Holtzblatt said community outreach groups that were shut down last spring due to the coronavirus could now provide some help in signing them up.

The Child Tax Credit changes are a vast undertaking, tax experts say. All taxpayers earning under $200,000 with children 17 or under living with them at least half the year can claim the full credit.

Biden’s bill increases the credit to $3,000 per child from $2,000 and allows it to be paid in advance for all income levels, as monthly cash payments from July to December of this year.

Nina Olson, executive director of the Center for Taxpayer Rights in Washington and the IRS’ national taxpayer advocate from 2001 to 2019, said a key challenge would be determining whether the children actually lived with their parents, which could hold up the payments.

The IRS also needs to change its culture to reflect a changing mission, she said.

“The IRS needs to recognize that it’s not just a revenue collector, but it is a social benefits administrator, and it needs to staff itself and organize its training accordingly,” Olson said.U.S. could send $1,400 COVID bill payments within days; child tax credit a bigger challenge