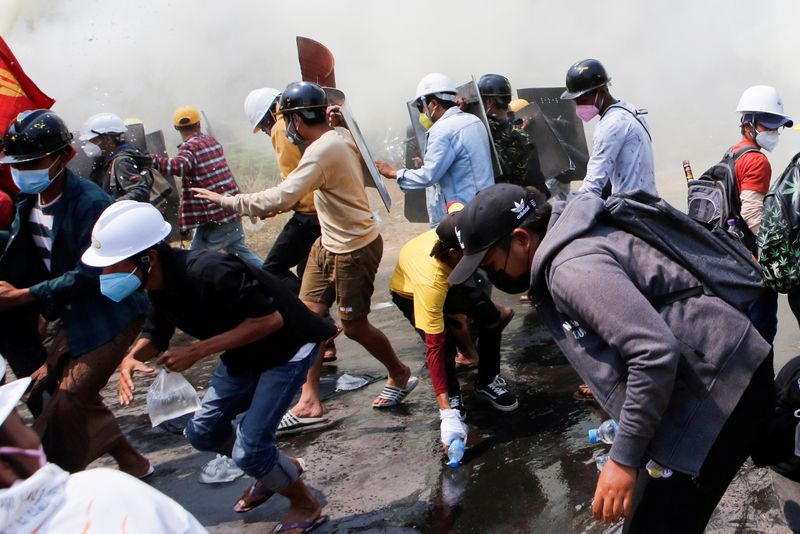 © Reuters. FILE PHOTO: Tear gas and fire extinguisher gas float around demonstrators as they run away from police during a protest against the military coup in Naypyitaw

By John Geddie and Joe Brock

SINGAPORE (Reuters) – Shortly after the military seized power, 55 foreign investors in Myanmar from Coca Cola to Facebook (NASDAQ:FB) signed a statement committing to the country and employees there during developments of “deep concern”.

A month on, those pledges are being sorely tested with Myanmar’s economy all but paralysed by massive anti-coup protests, widespread strikes and the junta’s killing of dozens of protesters drawing calls for boycotts and sanctions.

A sudden about-turn from Australia’s Woodside (OTC:WOPEY) Petroleum, one of the signatories to the statement, exemplifies the challenges. It said on Feb. 27 it was reducing its presence in the country amid concerns about violence and would pull its offshore exploration team – just one week after saying drilling would not be affected.

This week, fashion giant H&M, which has around 45 direct suppliers in Myanmar and is also a signatory to the statement, said it had paused new orders from the country due to transport and manufacturing disruptions.

H&M is not, however, taking any immediate decision on its long-term future in Myanmar.

“We fully recognise the complexities … in balancing different aspects to ensure that the people in Myanmar are not negatively affected,” said Serkan Tanka, Myanmar country manager at H&M.

One large global firm has already made a dramatic exit. Kirin Holdings Co is winding up a beer alliance with a military-linked company after coming under pressure from activist groups.

Escalating violence, which has seen more than 50 protesters killed, is only adding to the uncertainty facing companies anxious about reputational risk.

“If this goes on for months, more would probably just totally leave,” said Murray Hiebert, senior associate of the Southeast Asia programme at the Center for Strategic and International Studies.

Operating in Myanmar has long been a wrestle between high risk and potential high reward for foreign business.

The opening up of one of Asia’s last frontier markets in 2011 after half a century of military rule led to a surge in foreign direct investment. Net inflows peaked at $4.7 billion in 2017 compared with $900 million in 2010, according to the World Bank.

But even before the coup, firms were grappling with crumbling infrastructure, constant power disruptions, legal uncertainty and an economy controlled in large parts by the military.

While all foreign firms will be assessing and will be assessed over their next moves, energy companies – some of the longest standing foreign investors in Myanmar – are particularly likely to come under further pressure.

The United Nation’s human rights investigator on Myanmar, Tom Andrews, said in a report last week that countries should impose sanctions on Myanmar Oil and Gas Enterprise (MOGE), which is now controlled by the military and represents its largest source of revenue.

Total, which has been in Myanmar since 1992, and Chevron (NYSE:CVX) have a large offshore gas project in partnership with MOGE. A Chevron spokesperson said it will comply with all applicable laws and sanctions. Total declined comment on the threat of sanctions.

Telecom and internet companies too are in a difficult position as they deal with intermittent shutdowns of services and new amendments to cyber laws that threaten human rights.

Norway’s Telenor, which has a mobile licence in Myanmar, said on Monday that the amendments broaden the powers of the military and reduce civil liberties, calling for the restoration of a sound legal framework in Myanmar.

Just how corporates should respond to Myanmar’s challenges is a matter of hot debate.

Chris Sidoti, an expert on Myanmar who was part of a U.N.-led fact-finding mission in 2019, says all foreign firms should suspend their businesses in Myanmar because the military has taken over every facet of government.

Rights group Burma Campaign UK has called on Western brands to be diligent with who they work with but not to abandon Myanmar workers. Nearly half a million people in Myanmar are employed in factories producing textiles for retailers like H&M, Adidas (OTC:ADDYY), Gap and Zara.

John Bray, director at business consultancy Control Risks, said that pressure on firms in Myanmar needed to be guided by an assessment of “complicity”.

“If you are providing a service for the Myanmar people, which they are paid for and which promotes the development of the economy, I don’t think you’re complicit in what is going on in the streets,” said Bray.Analysis: From land of promise to pariah state – Myanmar coup rattles foreign firms