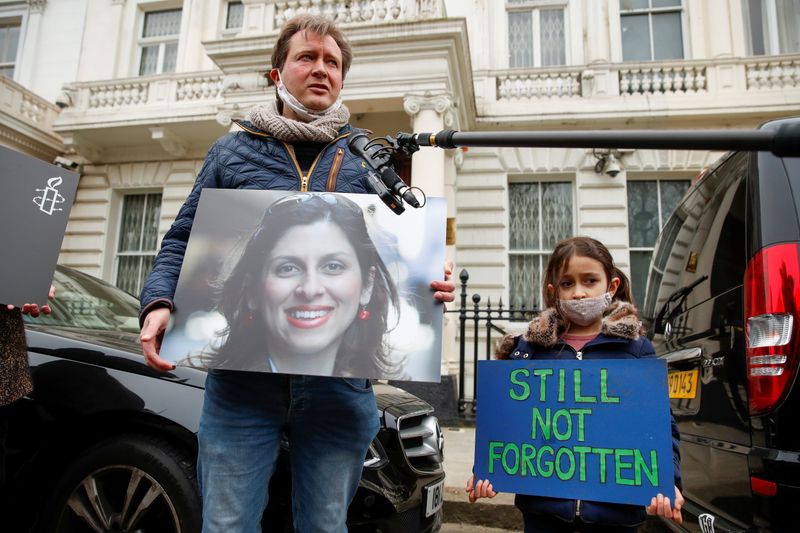 LONDON (Reuters) – British-Iranian aid worker Nazanin Zaghari-Ratcliffe was full of joy after she was freed from house arrest in Tehran, but her fate is still in doubt with a new court case in a week, her husband said on Monday.

“She’s completely unambiguous on it and it’s been lovely to have that, you know, joy on the other side of the phone,” her husband, Richard Ratcliffe, told Reuters.

Zaghari-Ratcliffe served a five year sentence which ended on Sunday. An ankle bracelet was removed, allowing her freedom to travel in Iran, but she still cannot leave the country, as she has been ordered to appear for a new court case on March 14 on charges of propaganda against the Iranian state. [L1N2L5085]

Despite the ambiguity about her future, her husband said she saw had a “big grin” during a video call. “It’s clearly a good step that they took the ankle tag off, they observed Iranian law,” he said.

The new court case “is a bit ambiguous at the moment but it’s there,” he said. “In truth until we get to Sunday we won’t really know what it means or where we are.”

He spoke outside the Iranian embassy in London, where he and the couple’s six-year-old daughter, Gabriella, tried and failed to deliver a petition calling for her to be allowed to return home.

Zaghari-Ratcliffe, a project manager with the Thomson Reuters (NYSE:TRI) Foundation charity, was arrested at a Tehran airport in April 2016 and convicted of plotting to overthrow the clerical establishment.

She served out most of her sentence in Tehran’s Evin prison, but was moved to her parents’ house under house arrest last March because of concern about the coronavirus.

Iran’s judiciary was not immediately available to comment about her release. Her family and the foundation, a charity that operates independently of media firm Thomson Reuters and its news subsidiary Reuters, deny the charge.’Big grin’ from British-Iranian aid worker in Iran, but doubt about fate, husband says Add a Comment