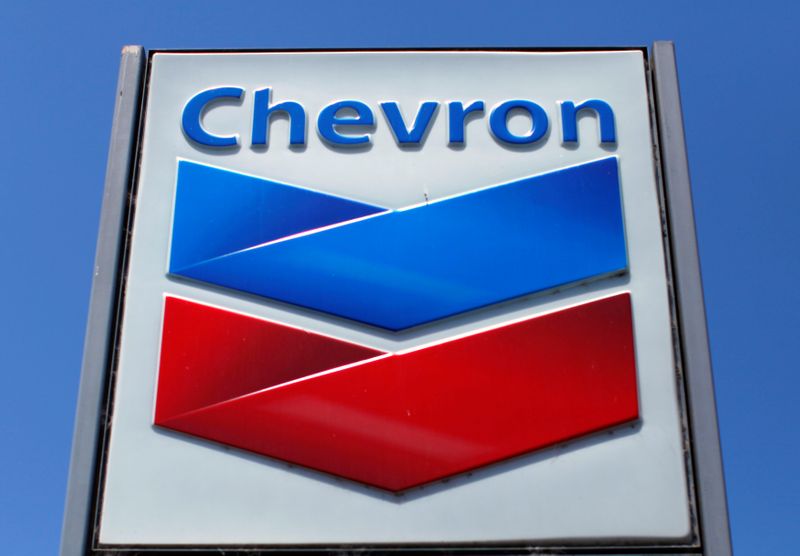 (Reuters) – Chevron Corp (NYSE:CVX) said on Tuesday it would keep project spending muted at around $14 billion through mid-decade and raised its climate goals, even as it took a different tack from major rivals by keeping its oil and gas production growing.

Falling energy demand due to pandemic lockdowns sent the industry into a tailspin in 2020 and led Chevron to a $5.54 billion annual loss, its first since 2016.

Investors have been pressuring Chevron and other big oil companies to reduce emissions that contribute to climate change, and rivals Royal Dutch Shell (LON:RDSa), BP (NYSE:BP) Plc and Exxon Mobil (NYSE:XOM) have said their oil and gas output would stay flat or fall to stay in line with climate or financial goals.

Chevron’s 2020 output was around 2.98 million barrels of oil and gas per day, and an investor presentation showed the company increasing output through 2025 though no numbers were given.

The company said it now expects cost savings of $600 million from its takeover of Noble Energy (NASDAQ:NBL) last year, double its previous estimate, helping lower its operating expenses 10% this year compared with 2019.

The company also expects to more than double its return on capital employed (ROCE) through 2025. Excluding items, it reported an about 3% ROCE in 2020.

Chevron will beef up investments over the next five years in the prolific Permian basin of Texas and New Mexico, where it slashed spending in 2020 to save money, as the costs of a major expansion in Kazakhstan lessen.

Permian production could still reach 1 million barrels per day by 2025, it said.

Chevron is now targeting a 35% reduction in its carbon intensity by 2028 and said it will eliminate routine flaring by 2030.

The company will make its annual presentation to investors this morning.

Chevron’s shares were last up marginally after falling over 1% at open in line with a broader decline in energy stocks.Chevron sticks to lower spending in higher investor returns pitch