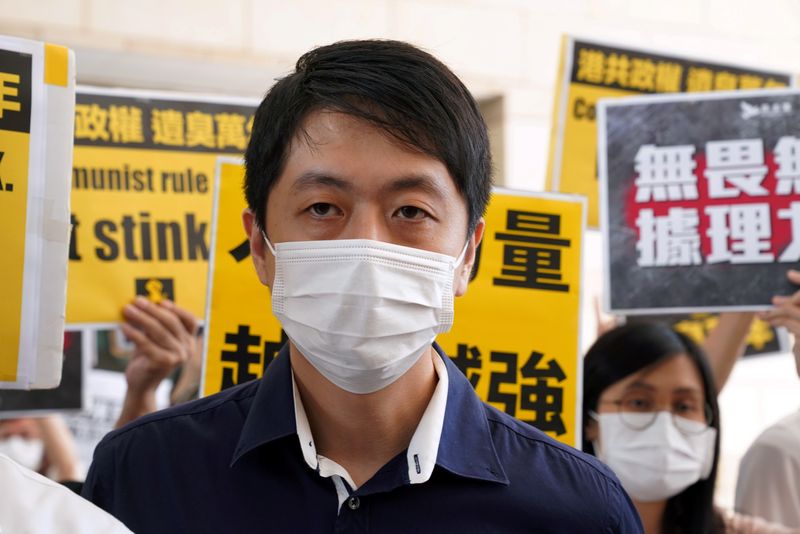 SYDNEY (Reuters) – Hong Kong pro-democracy activist Ted Hui has arrived in Australia where his family will settle after the Australian government provided an exemption to its closed border policy and assistance with flights, he said on Tuesday.

His arrival in Australia comes as 47 pro-democracy activists have been charged in Hong Kong with conspiracy to commit subversion under a new national security law, because they participated in an unofficial primary last July to select the strongest candidates for a legislative council election.

Hui, a member of the legislative council since 2016, was preselected to represent Hong Kong island for the election.

He said it had been painful to watch in the past week as his close colleagues were jailed after being denied bail in marathon hearings in the subversion case.

“As a participant in the primary election and a winner, I see it as a ridiculous act and unreasonable for the regime to put any accusation on us when it was totally peaceful,” he told Reuters in a telephone interview. He is undergoing a 14-day mandatory quarantine after arriving in Australia on Monday.

“It is only because it is against Beijing’s will that people are thrown into jail.”

Hui said he had decided to move to Australia from Britain, where he has spent the past three months, to spread the international reach of the pro-democracy activists.

“I feel more responsible now as an exile to tell the world how ridiculous it is,” he said.

Hui said during the interview that the coronavirus pandemic was stable in Australia, and he would be able to undertake face-to-face lobbying work.

In a Facebook (NASDAQ:FB) post on Tuesday announcing his move, Hui said that Australia and New Zealand are important members of the Five Eye intelligence sharing group that also includes the United States, United Kingdom and Canada, which have endorsed the pro-democracy movement in Hong Kong.

“I hope that my lobbying work will make the two countries tougher against China, have stronger support and actions towards the freedom of Hong Kong,” he said in the post.

As part of his lobbying, Hui told Reuters he would also seek more flexible visas for Hong Kong people seeking to come to Australia.

Hui said he was grateful to the Australian government for granting a visa and a place on a repatriation flight from London. He said he did not intend to apply for political asylum.

Australia’s home affairs office said it did not comment on individual cases.

“He would be able to contribute a lot in lobbying work, especially as Australia has been a main battlefield against the (Chinese Communist Party),” Poon told Reuters.

Hong Kong police ordered HSBC to freeze Hui’s bank accounts in December after he said he would go into exile in Britain to continue his pro-democracy activities.Former Hong Kong lawmaker lands in Australia; to continue pro-democracy work