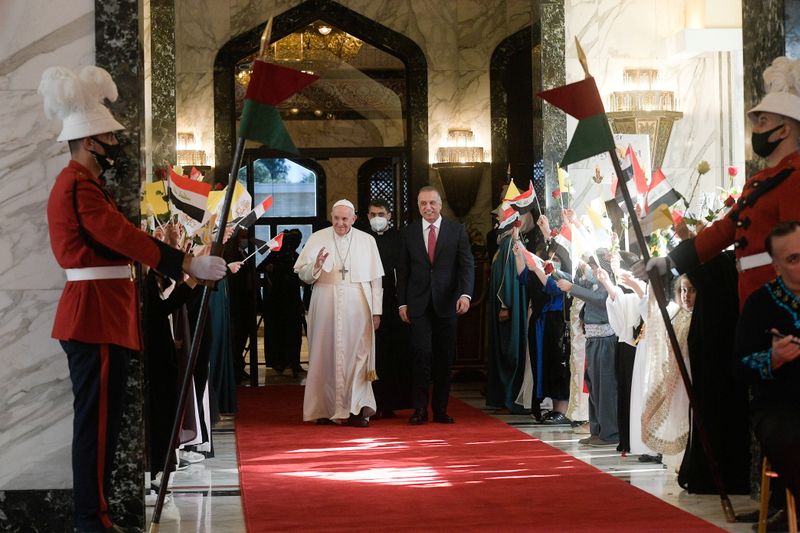 BAGHDAD (Reuters) – Iraq’s prime minister on Monday called on the country’s rival political groups to use dialogue to solve their differences, a move he said would reflect the “love and tolerance” shown by Pope Francis’ historic visit to the country.

Iraq suffers from chronic mismanagement and corruption, and a steady level of violence often linked to the rivalry between Iran and the United States in the region 18 years after the U.S. invasion of Iraq.

“In the atmosphere of love and tolerance promoted by the visit of His Holiness the Pope to the land of Iraq, we present today the call for a national dialogue,” Prime Minister Mustafa al-Kadhimi said in a televised speech.

Many in Iraq hope the Papal visit will garner more international support for Kadhimi’s government to handle sensitive crises, including reining in Iran-backed militias whose power and influence Kadhimi has sought to curb since taking office in May 2020.

The prime minister said dialogue would help to reduce tension in his country and pave the way for a successful early election.

Controlling armed groups which operate out of state control is still an significant challenge for the prime minister.

Pope Francis ended his tour, the first ever papal visit to Iraq, on Monday after visiting conflict-torn cities, meeting Muslim and Christian leaders and preaching peace and coexistence over war. The visit had started on Friday.

The pontiff also made a rare first event in meeting Iraq’s Grand Ayatollah Ali al-Sistani, Iraq’s top Shi’ite Muslim cleric who is one of the most important figures in Shi’ite Islam, both within Iraq and beyond.Iraq PM urges national dialogue after ‘love and tolerance’ of Pope visit Add a Comment