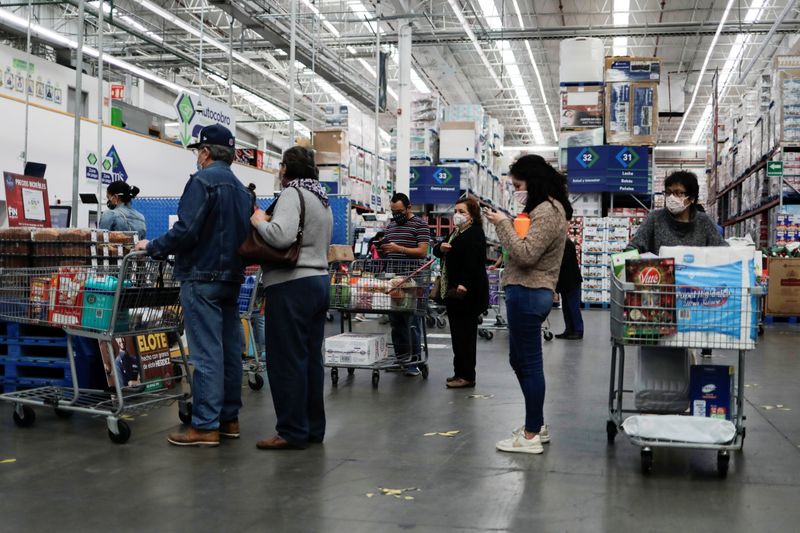 © Reuters. Shoppers wait in line to pay for purchases during the shopping season, ‘El Buen Fin’ (The Good Weekend) in Mexico City

MEXICO CITY (Reuters) – Mexican annual inflation accelerated to its highest rate in four months in February due to a rise in energy costs, but stayed within the central bank’s target range, data from the national statistics agency (INEGI) showed on Tuesday.

Consumer prices rose by 3.76% in the year through February, beating the consensus forecast of a Reuters poll for a reading of 3.72%. Inflation, which stood at 3.54% a month earlier, quickened to its highest level since reaching 4.09% in October.

The Bank of Mexico targets a rate of 3% with a one percentage point tolerance threshold above and below that figure.

The uptick in inflation may add weight to the view among some analysts who believe the Mexican central bank should pause its rate-cutting cycle when it meets for its next monetary policy decision.

Compared with the previous month, consumer prices rose 0.63 percent in February. A rise of 0.59% had been forecast in the poll.

The core index, which strips out some volatile items, rose 0.39% from January. The annual core inflation rate ticked up to 3.87%, slightly above the forecast figure.Mexico inflation quickens in February to highest since October