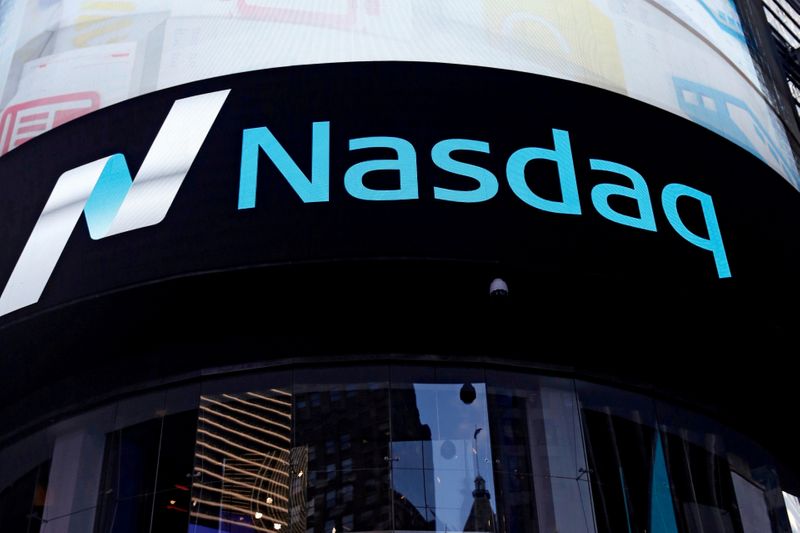 © Reuters. FILE PHOTO: A view of the exterior of the Nasdaq market site in the Manhattan borough of New York City

By Shashank Nayar and Medha Singh

(Reuters) – The S&P 500 and the Dow climbed on Monday, led by stocks poised to benefit the most from an economic rebound as the U.S. Senate passed the $1.9 trillion COVID-19 relief aid, while heavyweight tech-related stocks swung between gains and losses.

President Joe Biden said he hoped for a quick passage of the revised coronavirus relief package by the House of Representatives so he could sign it and send $1,400 direct payments to Americans.

Prospects of more government spending and faster economic growth have stoked fears of a spike in inflation, sending the benchmark 10-year Treasury yield to near one-year highs.

U.S. Treasury Secretary Janet Yellen, however, said the package would fuel a “very strong” U.S. recovery and she did not expect the economy to run too hot because of the increased spending.

The Dow was less than 100 points below its record closing high. The materials sector neared an all-time peak, while industrials and financials hit record levels. Only the technology sector was in the red.

“This is an ideal traders’ market with certain sectors and individual stocks performing better than the wider market, as investors pick and choose individual stocks that will perform better as the economy reopens,” said Anthony Denier, chief executive officer of trading platform Webull.

Most tech-related stocks, including Apple Inc (NASDAQ:AAPL), Microsoft Corp (NASDAQ:MSFT), Tesla (NASDAQ:TSLA) Inc and Amazon.com Inc (NASDAQ:AMZN) resumed a slide from the past three weeks on fears of higher interest rates, after the recent run-up in U.S. bond yields.

Tech stocks are particularly sensitive to rising yields because their value rests heavily on earnings in the future, which are discounted more deeply when bond returns go up.

The Russell 1000 growth index that includes technology stocks dropped about 0.4%, underperforming a 1.3% rise for its counterpart value index, that consists of cyclical stocks such as financials and energy.

Banks added about 0.8% as the yield on the benchmark 10-year note stood near a 13-month high, while airlines jumped about 5%.

Walt Disney (NYSE:DIS) Co jumped about 4.5% as California health officials set new rules that would allow Disneyland and other theme parks, stadiums and outdoor entertainment venues to reopen as early as April 1.

GameStop Corp (NYSE:GME) surged about 30% after the company said it had tapped shareholder Ryan Cohen to lead a transition to an e-commerce business.