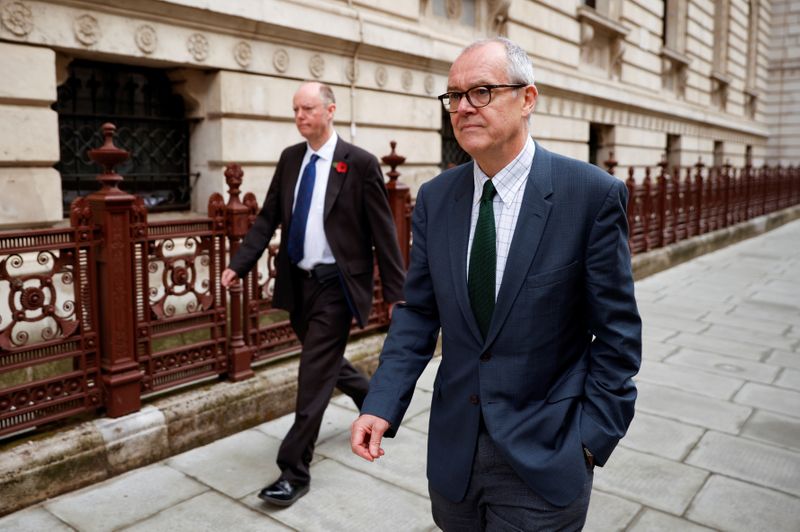 LONDON (Reuters) – Britain is not “out of the woods” on COVID-19 and it won’t be possible to eliminate coronavirus infections and deaths, the government’s top medical and scientific advisers said on Tuesday, stressing the need for a gradual exit from lockdown.

Prime Minister Boris Johnson has announced what he has called a cautious but irreversible roadmap out of England’s third national lockdown.

His Chief Scientific Adviser Patrick Vallance said that, while deaths were decreasing and the vaccine rollout was going well, the situation could quickly deteriorate.

“It’s all pointing in the right direction, but I think nobody can say with certainty that this is… finished,” he told lawmakers. “We’re certainly not out of the woods yet, even on this wave.”

More than 120,000 people in Britain have died from COVID-19, the fifth highest official global toll, but it has also had one of the world’s fastest vaccine rollouts, with more than a third of the population already receiving at least one dose.

Chief Medical Officer Chris Whitty said it was not possible to stop all COVID-19 deaths even with a successful vaccine rollout, although the size and severity of future surges in infections could be reduced with a cautious approach.

“All the modelling suggests there is going to be a further surge… The ratio of cases to deaths will go right down as a result of vaccination, but not right down to zero, unfortunately,” Whitty told lawmakers.

Schools in England re-opened to all pupils on Monday. The next steps in lockdown easing have been pencilled in at five-week intervals but officials have said that data, rather than dates, will dictate the pace.

Asked why encouraging data couldn’t lead to an acceleration of that timetable, Vallance said three to four weeks were needed to generate and assess the data, and the government wanted to give one-week notice of changes to rules.

“I think if you truncate that you are essentially flying blind,” Vallance said.UK officials urge caution on easing COVID-19 lockdown