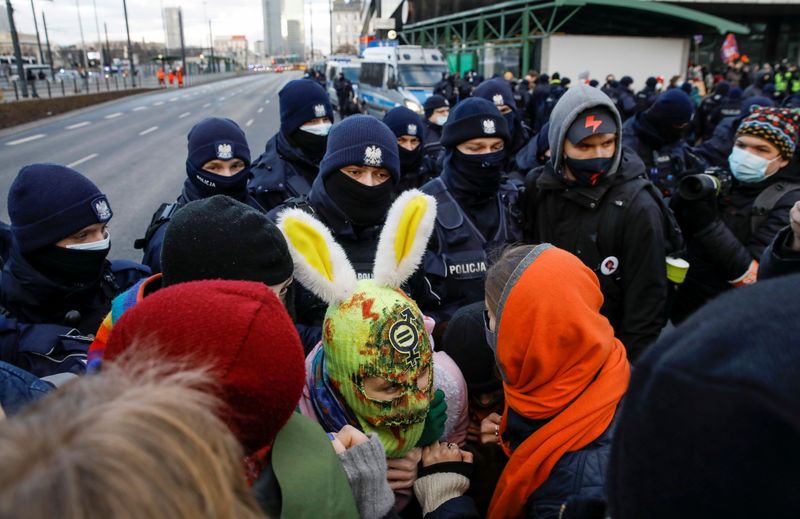 By Alicja Ptak and Joanna Plucinska

WARSAW (Reuters) – Poles took to the streets on Monday to mark International Women’s Day, in demonstrations around the country that took on added significance months after a constitutional court banned almost all abortions.

The October ruling, which took effect in January, unleashed a wave of protests that has morphed into broader anger at the government, particularly among young people. Recent protests have been much smaller, but the ruling party’s ratings in most opinion polls have slipped to around 30% from more than 40% in August.

In Warsaw, several dozen protesters brandishing placards with slogans such as “I am a feminist warrior” gathered in the city centre, where they were outnumbered by a heavy police presence.

Previous protests organised by the Women’s Strike movement, which opposes the tightening of restrictions regarding abortion, have been marred by violence, with the police criticised for heavy-handed tactics.

“It is difficult to say anything positive about Women’s Day today. We are at war and all I can hope for is that we will win the war,” Klementyna Suchanow, co-founder of the Women’s Strike told Reuters before the demonstration began.

“Women’s Day in 2021 has a specific flavour,” she said. “After the abortion regulations were tightened, this holiday takes on the significance of a battle, just like in the beginning when it was first established, over a 100 years ago.”

As police formed a cordon around the protestors, speech therapist Aleksandra Gajek, 24, called it an intimidation tactic. “The number of police is intended to scare us and force us to stop fighting for our rights,” she told Reuters.

The police was trying to keep traffic moving, spokesman Sylwester Marczak said by phone. “The actions of the police are determined by the blocking of traffic on one of the most important roundabouts in Warsaw.”‘We are at war’: Poles mark Women’s Day after abortion rules tightened