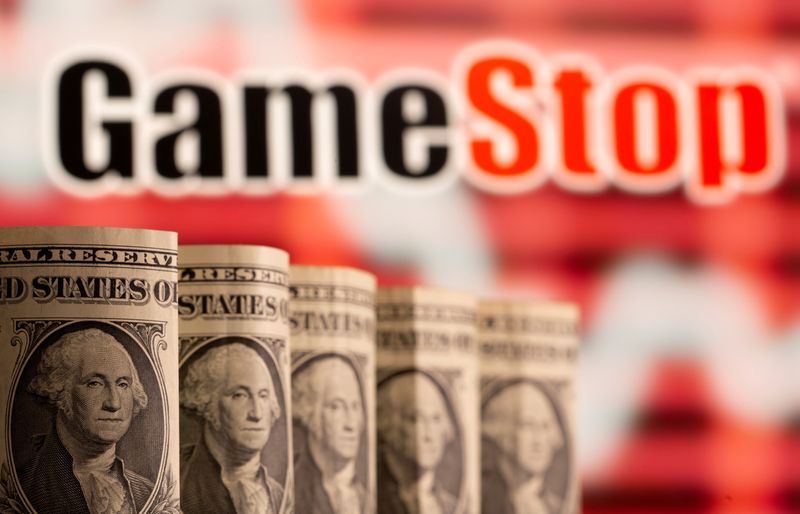 NEW YORK (Reuters) – A chunk of President Joe Biden’s coronavirus relief package is poised to end up in the stock market and could provide a boost for GameStop (NYSE:GME) and other stocks embraced by individual investors active in online social media forums.

The relief package, which is on track to be signed into law later this week, is set to provide $400 billion in direct payments of $1,400 per person, helping individuals earning less than $80,000 annually and couples making less than $160,000. The government should be able to start delivering checks almost immediately once Congress finalizes the bill and Biden signs it.

“I do think that you will find a lot of that stimulus money will end up in the market, and I think if anything it’s a bullish catalyst,” said Randy Frederick, vice president of trading and derivatives for Charles Schwab (NYSE:SCHW).

A Deutsche Bank (DE:DBKGn) survey of 430 retail investors last month found that on average they plan to put 37% of any stimulus checks directly into equities.

At that rate, the amount from the latest package that could go into stocks ranges from $25 billion, if only traders with online accounts spend money on stocks, to as much as $150 billion, if all stimulus recipients spend their checks in the market in the same proportion, according to Deutsche Bank strategist Parag Thatte.

U.S. equity funds have been seeing near-record inflows of about $15 billion a month, “so incremental flows stemming from stimulus payments can be sizable, especially if deployed quickly,” Thatte said in an email.

Despite a recent pullback in stocks, including a 10% correction in the tech-heavy Nasdaq, the benchmark S&P 500 is near record highs and has climbed more than 70% from lows during the throes of the pandemic in March 2020.

If stimulus payments do flow into the stock market, they could end up disproportionately going to GameStop or other stocks favored by retail investors active on social media platforms.

Frederick said that younger adults tend to be on the lower end of income brackets, and therefore more likely to be eligible to receive stimulus payments, and that younger investors are more inclined to invest in so-called “meme stocks.”

Shares of GameStop were soaring to start the week, following news about the video game chain’s e-commerce strategy, while other stocks favored by retail investors on forums such as Reddit’s WallStreetBets also were rallying.

There was some evidence of stimulus excitement among investors on social media platforms. On the popular WallStreetBets forum, an account called “IwantSpaceX” posted: “Lets get our Stimmy checks IN!”

The stimulus payments could add fuel to interest from individual investors that has already been rising, with the COVID-19 pandemic leaving Americans with more time in front of their computers or on their smartphones.

“We expect Households will be the largest source of equity demand this year,” Goldman strategists said in a note.

Brokerage TD Ameritrade (NASDAQ:AMTD) saw nearly 1.76 million retail accounts opened during January through September of 2020, a record amount for the company for the first nine months of a year.

“People have time, people have interest and now they are actually starting to understand what it is they are investing in,” said JJ Kinahan, chief market strategist at TD Ameritrade. “You have really started to see an interest from the individual investor in a way that we have never seen before.”Analysis: With $1,400 stimulus checks set to hit bank balances, stocks could benefit3