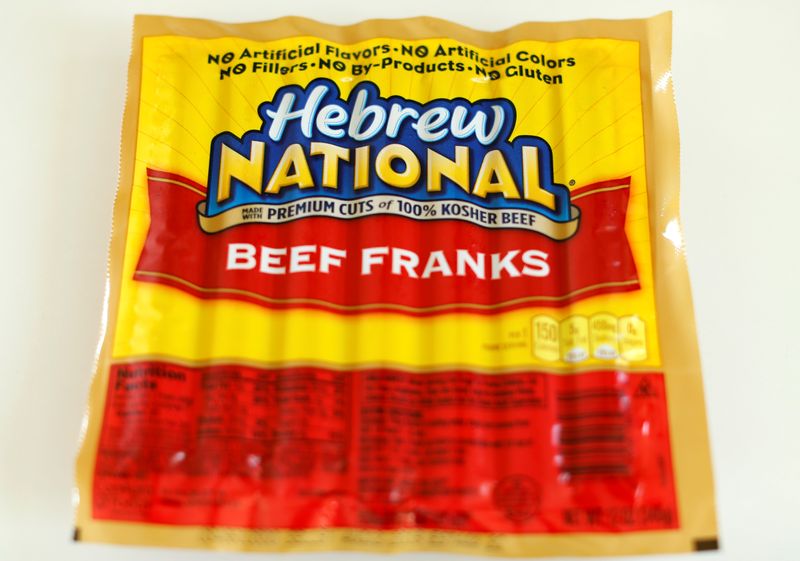 © Reuters. Hebrew National beef franks made by ConAgra Foods are shown in this illustration photograph taken in Encinitas, California

A deal, which could also include the liquid egg white brand Egg Beaters and sausage product brand Odom’s Tennessee Pride, could be valued at around $700 million, the people said.

Any agreement, however, is likely weeks away and Conagra could end up keeping the business or selling it to someone else, the people told the financial newspaper.

Food companies are looking to reshape their portfolios as a pandemic-driven surge in at-home eating gives a boost to companies’ balance sheets and revives sales of slower-growth brands, which they will use as tools to fetch better-than-normal valuations, Credit Suisse (SIX:CSGN) analysts wrote in a note in December.

Conagra, in particular, might consider divesting some of its $1.0 billion in refrigerated brands due to its lack of scale in the refrigerated section and also because it wants to take advantage of a $680 million tax asset to offset capital gains that expires in 2021, the brokerage had said.

Hebrew National has been one of Conagra’s top performing brands during the pandemic and has generated “strong” organic sales growth over the past two quarters.

If a deal goes through, it will mark Chicago-based Conagra’s third deal in the past six months. In September, the nearly $18 billion company sold its HK Anderson food business to UTZ Quality Foods LLC, and in December, it sold its Peter Pan peanut butter business to Post Holdings (NYSE:POST).

Conagra and JBS were not immediately available to comment outside business hours.Conagra in talks to sell hot dog brand Hebrew National to JBS: WSJ Add a Comment