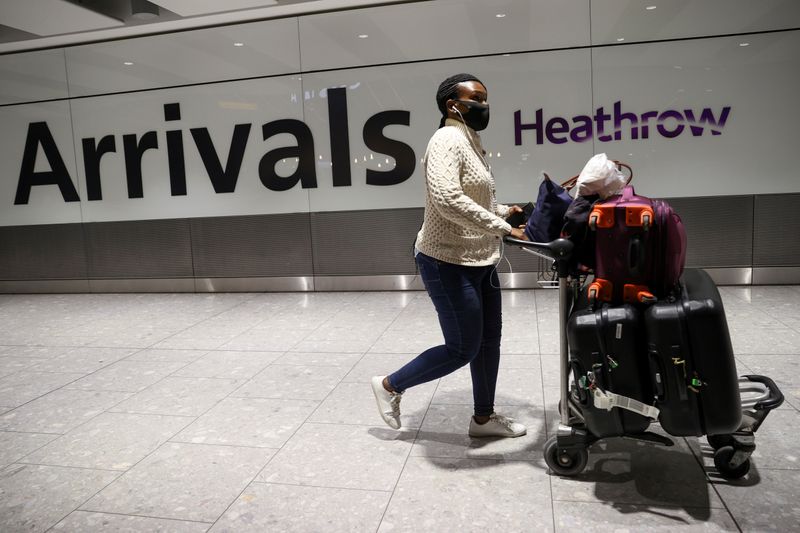 By Allison Lampert and Jamie Freed

(Reuters) – At one of the world’s busiest airports, immigration officials are uncovering fake COVID-19 test results daily by checking the required documentation for misplaced letters and errant vowels.

“Normally the way this type of counterfeit is spotted is an obvious spelling error,” said Lucy Moreton, an official with the Immigration Services Union (ISU), which represents border officials at London’s Heathrow Airport.

With global vaccination programs still in early stages, a “negative” COVID-19 test from a local lab is now often necessary for plane travel around the world. But there is no standard form, language or encryption technology for such a certificate.

“It is almost impossible to tell whether it is fake or not except by going through a lengthy and almost impossible verification process,” said Vinoop Goel, a senior official at the International Air Transport Association. Fraudulent test results have been found at airports in Montreal, Paris and Mexico.

Moreton’s ISU officers catch a “reasonable number” of fakes each day. But making various COVID-related record checks can add up to 20 minutes per traveler, raising doubts over Heathrow’s ability to handle an expected surge in summer traffic.

Concerns over wait times and public health risks posed by an embryonic trade in forged results are driving global efforts to produce fraud-resistant COVID-19 certificates that can be read easily across borders.

Discussions led by the United Nations’ aviation agency in Montreal mark the broadest attempt yet to convince governments to take action. The International Civil Aviation Organization (ICAO) is scheduled to review and potentially adopt guidance on Friday, a person familiar with plans said.

“Enough to make you never want to travel again,” fumed passenger Camilla Tetley, who said on Twitter she spent six hours in an immigration control line at the airport.

A government spokesman took exception to that explanation.

“It is incorrect to say that Border Force are not providing adequate staffing numbers at Heathrow. We have maintained staffing levels at Heathrow throughout the pandemic,” he said in an email.

Providing false documents is against the law, he added, stressing that “pre-departure testing is in place to protect the health of the UK public.”

Apps from carriers including American Airlines (NASDAQ:AAL), British Airways and United Airlines, as well as one for the International Air Transport Association’s (IATA) new Travel Pass can hold health data such as testing results on a phone.

But carriers need guidelines, especially in the United States, where airlines are responsible for verifying passengers’ test results before boarding.

On Monday, U.S. airline, travel and aerospace groups urged the Biden administration to come up with guidance on how to authenticate test results and still protect passengers’ privacy.

The Biden administration could look to recommendations from ICAO, the agency that sets global standards on everything from runway markings to crash investigations.

The recommendations ICAO will consider, from a task force, would have countries weigh technologies that would ensure testing is secure, trustworthy and complies with data protection legislation, someone with knowledge of the matter said.

One option under consideration involves a government-issued digital seal used on passports. A lab would transmit data showing a negative test result to the government, which would provide an encrypted bar code securing a travel-ready document or digital product, scannable at the airport.

Discussions held by ICAO’s task force echoed a broader debate over passenger privacy, since some technologies require health information to be transmitted digitally.

Using passport technology to secure lab tests also evoked fears that some countries may not have the resources to issue large volumes of secure passes with extremely short shelf lives.

“Issuing passports is not the same scale as issuing test certificates,” said a second person involved in the talks. “A passport lasts for 10 years, while a (coronavirus) test lasts for three days.”