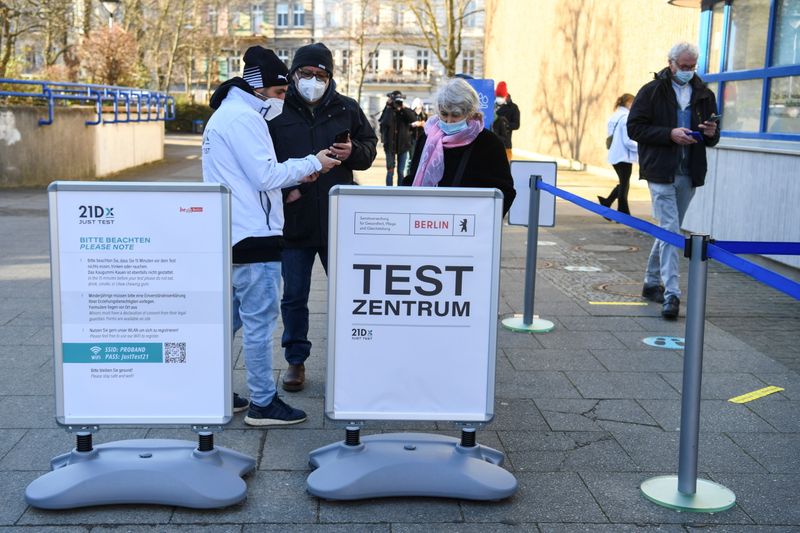 BERLIN (Reuters) – Germany’s leading business associations agreed with the government on Tuesday to push companies to expand coronavirus testing in an effort to curb the spread of new variants until more people have been vaccinated.

The associations, who are influential but have no direct power over individual firms, stopped short of introducing targets but made a formal appeal to companies to offer employees the opportunity to be tested.

“Testing within companies will be an important bridge in the event of increased incidences and a more aggressive corona mutation, until vaccinations can start among large parts of the workforce,” the four associations said in a statement.

Chancellor Angela Merkel welcomed the decision, adding that companies should make a significant contribution to testing among employees.

“We in government will look very closely at what comes of this,” she said, pointing to a review in early April.

It was unclear how the additional testing would be financed.

Frustration is growing among Germans over a sluggish vaccine rollout compared to countries such as Britain, Israel and the United States and a lack of widespread rapid testing.

The number of confirmed coronavirus cases in Germany has risen to 2.5 million, data from the Robert Koch Institute showed on Tuesday. More than 72,000 people have died. Around 6.2% of the population have been vaccinated at least once.German business groups tell firms to expand coronavirus testing Add a Comment