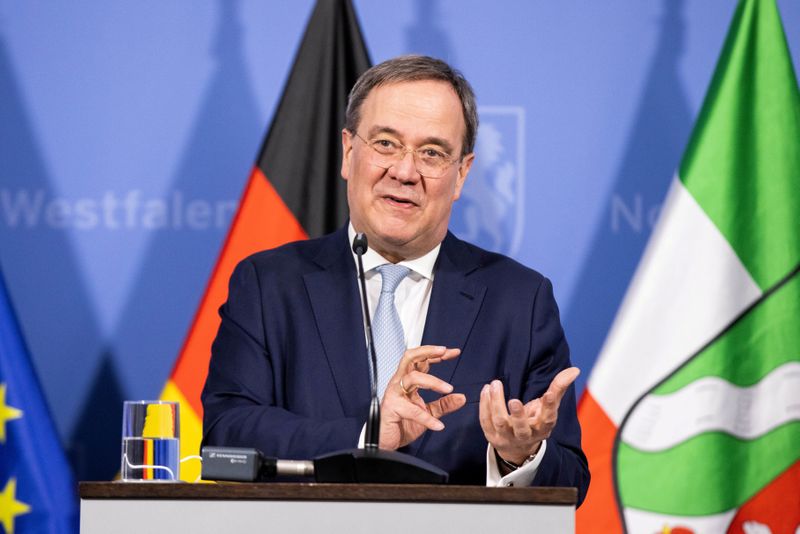 By Paul Carrel and Andreas Rinke

BERLIN (Reuters) – A face mask procurement scandal is raising concerns among Germany’s Christian Democrats (CDU) that they could lose power in a key state government after an election on Sunday, harming party leader Armin Laschet’s hopes of becoming chancellor.

The vote in the southwestern Baden-Wuerttemberg region poses an awkward test for Laschet before September’s federal election when he hopes to succeed Chancellor Angela Merkel, who is stepping down after 16 years at the helm.

Baden-Wuerttemberg, home to Germany’s car industry, was once safe CDU turf. But now the CDU risks losing its place as the Greens’ junior ruling partner to an alliance of Greens, Social Democrats (SPD) and liberal Free Democrats – dubbed a ‘traffic light’ coalition after their party colours.

An election will also take place on Sunday in the neighbouring state of Rhineland-Palatinate, where such a ‘traffic light’ coalition already governs.

CDU support has been slipping in both states, and party officials worry it has been hit further after a CDU lawmaker from Baden-Wuerttemberg said on Monday he would quit over payments he received for brokering face mask procurement deals for local authorities.

CDU leaders fear that if a traffic light alliance ousts them from government in Baden-Wuerttemberg, then such a tie-up could gain credibility at September’s federal vote – and could leave the party in opposition at national level.

Sunday’s elections will also have ramifications within the conservative bloc, which runs Germany’s federal government in coalition with the centre-left SPD.

Laschet took pole position in the race to succeed Merkel by winning the CDU leadership two months ago, but a loss in Baden-Wuerttemberg could help his Bavarian rival Markus Soeder in their contest to be the conservative chancellor candidate.

“If the CDU is hit badly and fails to even enter into government in Baden-Wuerttemberg, Soeder could get in the door to replace Merkel as chancellor,” said Naz Masraff at Eurasia, a political risk consultancy.

Soeder, the burly, confident leader of the CDU’s Bavarian sister party, the Christian Social Union (CSU), is the preferred conservative candidate for chancellor among German voters. He senses a unique chance to assert himself as a conservative unifier.

Soeder has said the election in Baden-Wuerttemberg, where the CDU lead candidate did not back Laschet for party leader, will have little bearing on the choice of chancellor candidate to represent the CDU/CSU alliance, dubbed ‘the Union’.

Soeder and Laschet want to settle the candidacy matter by May 23. No German chancellor has ever come from the CSU.

Laschet is not taking any chances.

He has sought to dispel lingering concerns in the party that he could be a weak leader, ripping into his Social Democrat rival for the chancellery, Olaf Scholz, whom he accused of “arrogance and ignorance in the middle of the pandemic”.

CDU officials in Baden-Wuerttemberg say privately they would only stand a chance of winning the state if the Greens’ popular premier, Winfried Kretschmann, who came to power in 2011 after the Fukushima nuclear disaster in Japan, was not running again.

For the Greens, the prospect of a third term running Baden-Wuerttemberg is a chance to stake a claim for the chancellery in September, though they lag the CDU/CSU nationally in polls.

“The message from an election victory in Baden-Wuerttemberg would be: We can beat the Union,” Green Party national director Michael Kellner told Reuters.Germany’s Laschet faces key electoral test on road to chancellery Add a Comment