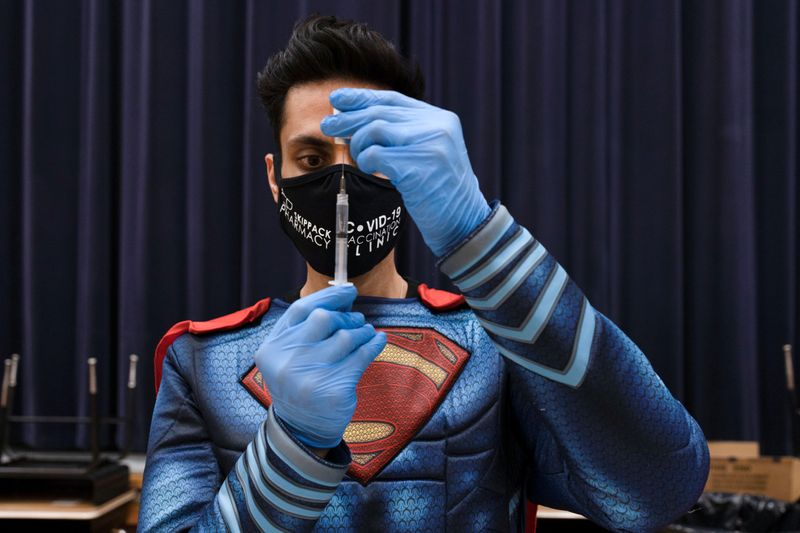 © Reuters. A young pharmacist has made it his mission to vaccinate his community in rural Pennsylvania

By Hannah Beier and Maria Caspani

SCHWENKSVILLE, Pa. (Reuters) – Behind the counter of Skippack Pharmacy in Schwenksville, near Philadelphia, owner Mayank Amin has been working late into the night since his independent drugstore received state approval to administer COVID-19 vaccines in late January.

There are thousands of emails to sort through and phone calls to field, supplies to organize, appointments to schedule.

Amin, known as Dr. Mak, set up a vaccination clinic on Super Bowl Sunday at the local firehouse that drew more than 1,000 people who kept their appointments for shots despite the snow that day.

“It was just like a party out there,” Amin, 36, recalled during an interview with Reuters in late February. “It was something you could have never imagined in your life, to see four strangers carrying somebody on a wheelchair to get them through the mud and into the building.”

Thanks to deep ties with their communities and the trust they have been able to establish over the years, some local pharmacists are instrumental in reaching people who might be reluctant to get vaccinated or may not know about vaccination efforts, said Jennifer Kates, the director of global health and HIV policy at Kaiser Family Foundation.

The vaccine rollout, which the administration of former President Donald Trump left to the states to carry out without a federal blueprint or sufficient funding, has proven to be choppy. Under President Joe Biden supply has increased but some distribution and access hurdles persist.

Montgomery County, where Schwenksville is located, has one of the highest per capita vaccination rates in the state, according to the state health department website. Pennsylvania ranks 28 out of 50 states with 18% of residents getting at least one shot, according to the Centers for Diseases Control and Prevention. (https://tmsnrt.rs/2WTOZDR)

On a gray Saturday morning in late February, Amin slipped into a Superman costume, the remnant of Halloweens past that he now sometimes wears for vaccinations, and drove through the frozen suburbs to deliver two COVID-19 vaccines to home-bound patients.

“What a surprise!” 74-year-old on Gail Bertsch said after Amin and a few volunteers, whom she had not been expecting, knocked on her door. She and her husband James, who suffers from dementia, both got injections.

“I can’t believe we can actually have this done,” she said.

Amin has also vaccinated people by appointment at his pharmacy, including holding a special clinic for pregnant women and another one for children with underlying health conditions.

Among them was the pharmacist’s nephew, who suffers from neurofibromatosis, a condition that causes tumors to form in the brain, nerves, and other parts of the body.

Some 3,000 people have received first shots of both Moderna (NASDAQ:MRNA) and Pfizer-BioNTech through Skippack Pharmacy since early February, Amin said. Among some 1,000 residents who received second doses over the weekend were Chester and Martha Pish, 97 and 98 years old respectively, who have been married 78 years.

The effort has been all-consuming for Amin, and riddled with hurdles, including organizing vaccine stocks – which sometimes arrive at a few hours’ notice, a side effect of the supply chain hiccups that are among the problems that have plagued the rollout.

The young pharmacist reunites with his pregnant wife only on weekends as a health precaution and spends the week at his parents’ home in Lansdale. The couple will welcome their first child in May.

“I want to be there when my child is born, and I want to make sure that all my people are vaccinated by then,” he told Reuters. “If I can, that would be my dream.”

Pandemic hardship and now the drive to get shots into people’s arms have united his Montgomery County community behind the young pharmacist.

On a recent Friday, five volunteers converged in the back of the store. They filled spreadsheets with patients’ contact information and checked the inventory of vaccination supplies.

Amin has just one other full-time employee, Jacquelyn Ziegler, and two pharmacy student interns, Erica Mabry and Isabelle Lawler. But he can count on dozens of volunteers, including family members, to answer the phone and help less tech-savvy patients navigate the online system to book a COVID-19 vaccine appointment.

“It’s just incredible how everyone has kind of like filtered into this one space,” said event planner Courtney Marengo, one of Amin’s volunteers.

Amin said he did not set out to own a pharmacy. But he moved to fill a void left when Skippack, a 50-year-old local institution, was bought out by national giant CVS in 2018. The chain acquired Skippack Pharmacy’s assets but left it shuttered. Amin bought the pharmacy from CVS before the pandemic in hopes of keeping the resource in the community.

“I feel like sometimes things fall into your lap at certain points in your life,” he said. “You might not have planned for it to happen, but things happen for the right reason.”How one small Pennsylvania pharmacy is vaccinating thousands Add a Comment