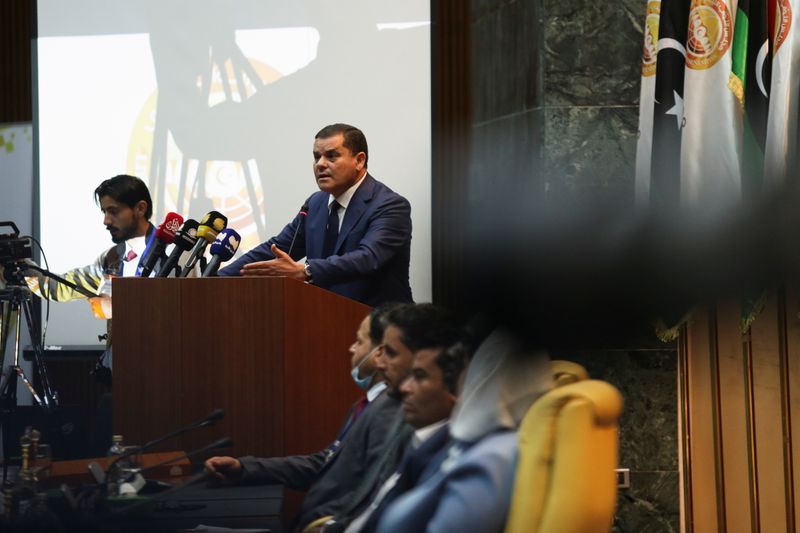 SIRTE, Libya (Reuters) – Libya’s designated interim prime minister, Abdulhamid Dbeibeh, urged the long-divided parliament on Tuesday to back his proposed unity government as it prepared for a confidence vote expected on Wednesday.

The parliament, which split between western and eastern factions along with most state institutions as the country fractured soon after a 2014 election, is meeting for the first time in years for the session in the frontline city of Sirte.

Though the U.N.-backed process appears to offer the clearest path in years to end Libya’s decade of chaos and violence, it has also been dogged by allegations of corruption, influence peddling and the presence of foreign mercenaries.

Meanwhile, Dbeibeh’s 35-member cabinet list, distributed over the weekend after weeks of intense negotiating to keep all Libya’s varied factions on board, was still being amended on Tuesday, he said.

Parliament spokesman Abdullah Belhaq said a final cabinet list would be presented to the parliament on Wednesday for a vote.

The session is taking place in Sirte’s Ouagadougou Conference Centre, built by Muammar Gaddafi as a glossy gift to his hometown but damaged in fighting after his downfall and used by Islamic State when it ruled the city in 2015.

This year it has functioned as headquarters of a military formed by Libya’s two main warring sides and the rival administrations they back to oversee their ceasefire.

The Tripoli-based Government of National Accord (GNA), which is recognised by the United Nations, last year repulsed a 14-month assault on the capital by Khalifa Haftar’s eastern-based Libyan National Army (LNA), leading to the truce.

Addressing parliament, Dbeibeh decried the continued presence of mercenaries and other foreign forces in Libya and said his government’s goals of unifying state institutions and holding an election planned for Dec. 24, if realised, would be big achievements.

Both those ends were written into the mandate for his interim unity government by 75 delegates convened by the United Nations in meetings in Tunis and Geneva to plot a path to elections.

However, the process, in which delegates voted on rival leadership candidates, led to allegations of vote buying. The issue was not raised in Tuesday’s parliament session.Libya PM addresses parliament as government vote looms