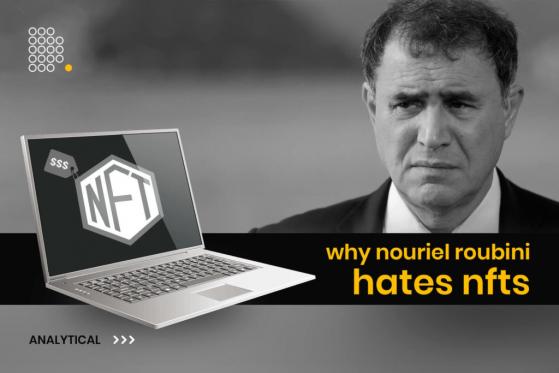 If you have followed the development of the 2008 market crash, the name Nouriel Roubini should not be unknown to you. Roubini was one of the few people that predicted the 2008 crash, but it seems he didn’t have the same success with Bitcoin and cryptocurrencies in general.

In 2018 Mr. Roubini testified before the U.S. Congress, claiming that Bitcoin is the mother of all scams and has continued to criticize the digital economy ever since. It seems that his next target is non-fungible tokens (NFTs) that are a complete scam, according to Roubini.

Nouriel Roubini isn’t the only critic of emerging digital currencies and projects. Many economists and big Wall Street names have had the same take on Bitcoin since its inception. When BTC hit $9K, Warren Buffet called Bitcoin rat poison squared, but do all of these claims have any weight?

The continuous criticism did affect digital markets when the total market cap was a lot lower. As more and more people continue to invest in these digital assets, it seems inevitable that all doomsday prophecies will never be fulfilled.

To understand if any of these claims have merit, we must look at the other side of the story and see how much of an impact NFTs really had on the outside world.

Those that are familiar with the digital art space surely know who BEEPLE is. For those that are out of the loop, Beeple is the nickname of Mike Winkelmann who is a sort of a one-man-show. At the time of writing, this digital artist has 5075 art pieces to his name.

All of this wouldn’t sound very interesting if every single art piece wasn’t created in less than 24 hours. Every single day, Mike Winkelmann was creating a new art piece and posting it online for free. It took years before NFTs became a medium between artists and their fanbase. The first-ever “NFT drop” from this particular artist has generated more than $3 million in sales. For some, this may sound like a lot of money for pieces of digital art, but it is definitely a game-changer for artists.

Without taking any sides, it is almost impossible not to conclude that non-fungible tokens are a revolution in the digital art space. There seems to be enough demand for digital art right now, and NFTs are almost a necessity. Regardless of all the criticism, this is the first time the online community successfully solved a present problem for years – artists and content creators were never compensated properly for their work.

On the other hand, economists and critics like Nouriel Roubini may have a valid point as well. We can never know if the demand for non-fungible tokens will stay at the same levels as today, but to be fair, no one can predict the future.