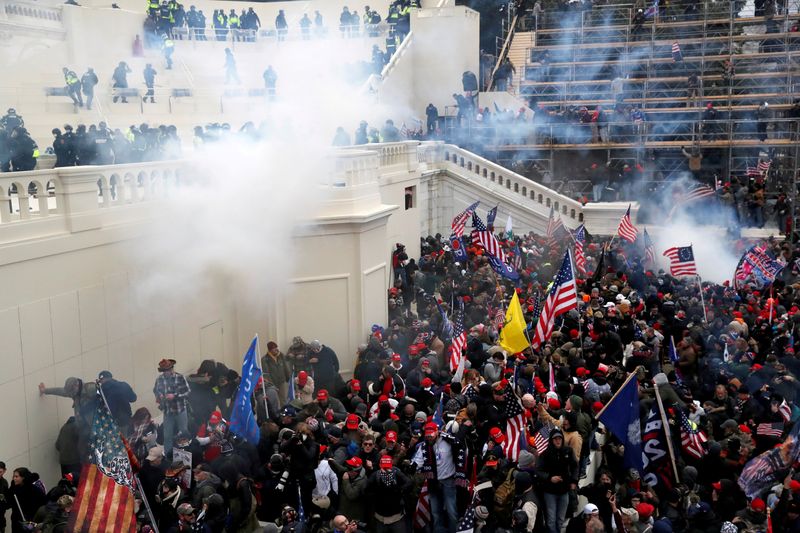 The Justice Department in a filing late on Monday said it would disclose evidence to defense lawyers this week showing that Oath Keepers members and associates “were actively planning to use force and violence” during the Capitol riots that forced members of Congress and their staff to flee or hide.

The filing said the messages, exchanged on the encrypted texting app Signal, were sent by individuals including Stewart Rhodes, a former Army paratrooper and Yale-educated lawyer who founded the anti-government group in 2009.

According to the court filing, on the afternoon of Jan. 6 Rhodes told followers: “Come to the South Side of the Capitol on steps.”

Soon after, Rhodes allegedly posted in a group chat a photograph of the Capitol with the caption: “South side of US Capitol. Patriots pounding on doors.”

The court filing is the clearest indication yet that investigators believe Rhodes played a significant role in instigating the attack. Rhodes, who has not responded to requests for comment, has not been publicly charged over the Jan. 6 attack.

Last month, a federal grand jury indicted nine associates of the Oath Keepers, charging them with conspiring to storm the Capitol.

The Justice Department disclosed the messages allegedly sent by Rhodes in a brief arguing that Thomas Caldwell, an alleged Oath Keepers member, should be jailed while he awaits charges.

According to the Justice Department, because of rules against bringing weapons into the District of Columbia, Caldwell discussed “whether it would be possible to recruit people with boats to join the plan, so that they could participate in the quick reaction force and ferry ‘the heavy weapons’ across the Potomac River.”

Caldwell has said he is innocent and denied being a member of the Oath Keepers.

The Justice Department said in the court filing that “there is no evidence that Caldwell participated in the chat, but the investigation is ongoing.”Oath Keepers founder wanted to use ‘force and violence’ in Capitol attack, U.S. alleges Add a Comment