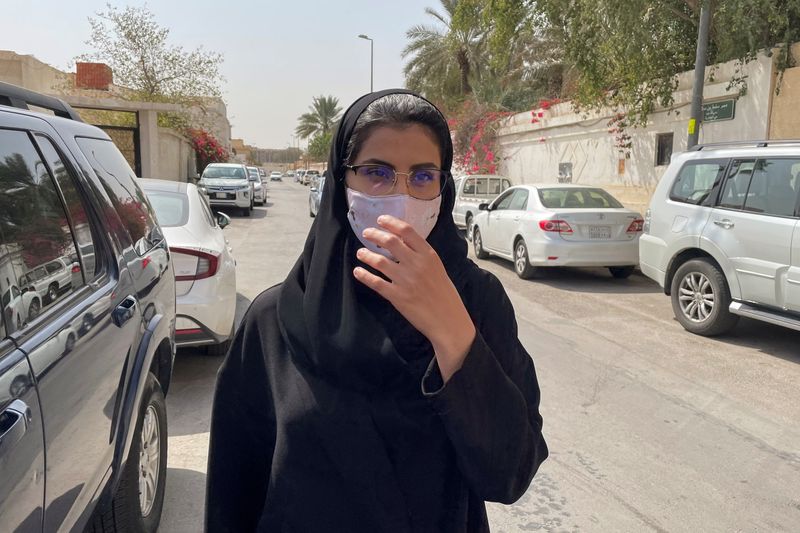 © Reuters. Saudi activist Loujain Al-Hathloul makes her way to appear at a special criminal court for an appeals hearing, in Riyadh

RIYADH (Reuters) – Women’s rights activist Loujain al-Hathloul, who was released last month after three years in prison, said on Wednesday she hoped a Saudi court would amend her sentence as she headed to an appeals hearing.

“Let’s hope the sentence has been changed or modified a little bit. We will see how it goes,” Hathloul, 31, told reporters outside Riyadh’s Special Criminal Court before entering for a second session regarding her appeal.

Hathloul, who championed women’s right to drive and for an end to Saudi’s male guardianship system, was detained in May 2018 and sentenced under broad cybercrime and counterterrorism laws in December to nearly six years in prison on charges that United Nations rights experts called spurious.

The court suspended two years and 10 months of her sentence, most of which had already been served. Hathloul remains under a five-year travel ban.

Hathloul rose to prominence in 2013 when she began publicly campaigning for women’s right to drive in Saudi Arabia.

She was arrested for the first time in 2014 while attempting to drive across the border from the United Arab Emirates – where she had a valid driver’s licence – to Saudi Arabia.

She spent 73 days in a women’s detention facility, an experience she later said helped shape her campaigning against the kingdom’s male guardianship system.

Saudi authorities released two activists with U.S. citizenship on bail in February pending trials on terrorism-related charges In January, a Saudi appeals court nearly halved a six-year prison sentence for a U.S.-Saudi physician and suspended the rest, meaning he did not have to return to jail.Saudi rights activist al-Hathloul hopes for sentence change ahead of appeals hearing Add a Comment