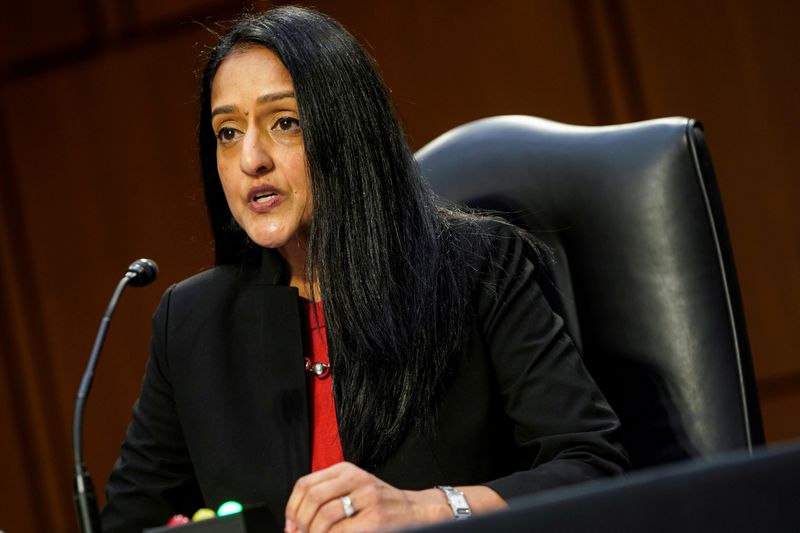 WASHINGTON (Reuters) – Vanita Gupta, President Joe Biden’s nominee for the Justice Department’s No. 3 post, said on Tuesday that she doubts that big tech companies would be excited about her being confirmed and promised to pursue vigorous enforcement of antitrust law.

The U.S. Senate Judiciary Committee conducted a confirmation hearing for the Democratic president’s nominations of Gupta as associate attorney general and Lisa Monaco as deputy attorney general, the department’s No. 2 job.

Gupta said she plans to bring the full force of U.S. antitrust laws to bear to protect competition.

Among other responsibilities if confirmed by the Senate, Gupta would oversee the department’s Antitrust Division. The department sued Alphabet (NASDAQ:GOOGL)’s Google last year for allegedly breaking antitrust law and has other investigations of big tech companies underway. Biden has not yet made his nomination to head the Antitrust Division.

Gupta was asked during the hearing about her relations with the big tech firms such as Amazon (NASDAQ:AMZN), Apple (NASDAQ:AAPL) and Facebook (NASDAQ:FB), which are accused of abusing their powerful platforms.

“I will just say based on my prior engagements with tech companies, I would highly doubt that they would be excited necessarily about my confirmation,” Gupta told the senators.

“My role as a civil rights lawyer has been to push the tech companies very hard on any number of issues,” Gupta added. “If I am confirmed as associate attorney general, I will bring the full force of our country’s antitrust laws to bear to protect competition which is so core to our economy and to protecting consumers.”U.S. Justice Department nominee Gupta vows strong antitrust enforcement