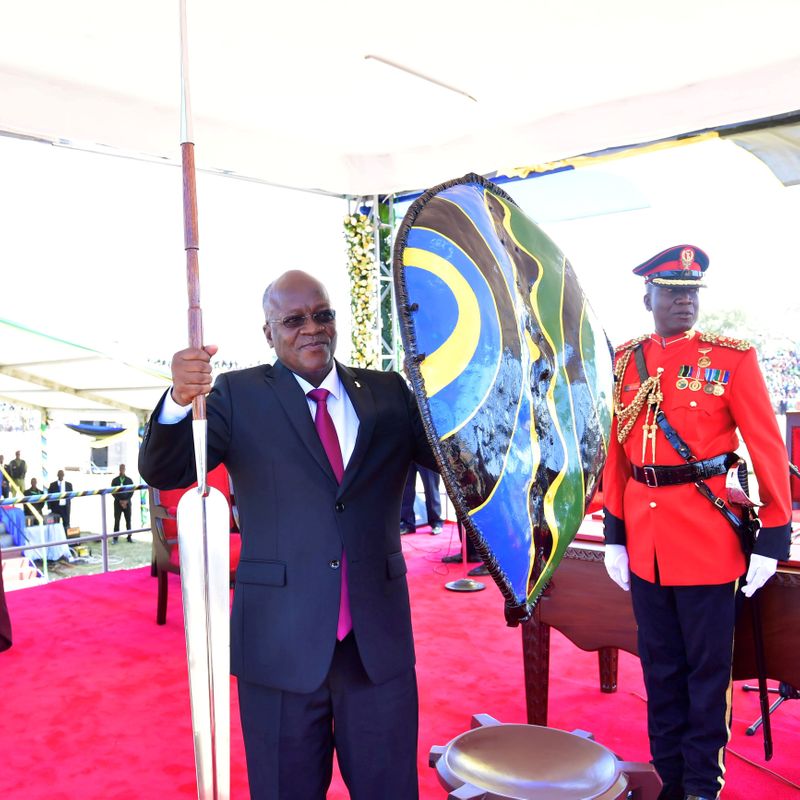 © Reuters. FILE PHOTO: FILE PHOTO: Tanzania’s re-elected President John Pombe Magufuli holds a spear and shield from the elders after he was sworn-in for the second term at the Jamhuri stadium in Dodoma

By David Lewis and Duncan Miriri

Social media commentators and Tanzania’s opposition have suggested Magufuli, Africa’s most prominent COVID-19 sceptic, may have the virus, but there was no official confirmation.

Media speculation was rife too: Kenyan daily The Nation quoted unnamed political and diplomatic sources as saying “the leader of an African country who has not appeared in public for nearly two weeks” had been on a ventilator in Nairobi with COVID-19.

Magufuli, a 61-year-old leader nicknamed “The Bulldozer,” was last seen in public on Feb. 27 looking his normal self as he swore in a new chief secretary at State House in Tanzania’s commercial capital Dar es Salaam.

His director of communications Gerson Msigwa and government spokesman Hassan Abbas did not respond immediately to Reuters messages seeking comment. A representative for Kenya’s foreign ministry had no immediate information and Nairobi Hospital did not give information when called by Reuters.

“The president’s wellbeing is a matter of grave public concern. What’s it with Magufuli that we don’t deserve to know?”, opposition leader Tundu Lissu said in a tweet late on Tuesday as rumours flew on Tanzania’s social media.

“It’s a sad comment on his stewardship of our country that it’s come to this: that he himself had get COVID-19 and be flown out to Kenya in order to prove that prayers, steam inhalations and other unproven herbal concoctions he’s championed are no protection against coronavirus!” added Lissu, without providing evidence.

Magufuli has a history of heart issues, according to a senior Tanzanian medic close to the government who asked not to be named, and a private security official in Kenya with extensive official contacts in Tanzania.

‘VACCINES ARE NOT GOOD’

Magufuli has downplayed the threat of COVID-19 in Tanzania and scoffed at global panic. He urged Tanzanians to put faith in prayer and homespun remedies such as steam inhalation rather than vaccines, which he said were dangerous and part of a Western conspiracy.

“Vaccines are not good. If they were, then the white man would have brought vaccines for HIV/AIDS,” he said earlier this year.

To the frustration of experts, Tanzania stopped reporting coronavirus data in May last year when it had 509 cases and 21 deaths, according to World Health Organization (WHO) data.

Even as COVID-19 spread around Africa, Tanzanians were still allowed to gather, for example to watch sport. The president rubbished imported testing kits, saying they also returned positive results on a goat and pawpaw fruit.

Magufuli was first elected in 2015 and beat Lissu to win re-election last year in the former British colony. He has faced accusations from Western countries and opposition parties of eroding democracy, which he denies.

He has been out of public view for periods in the past.