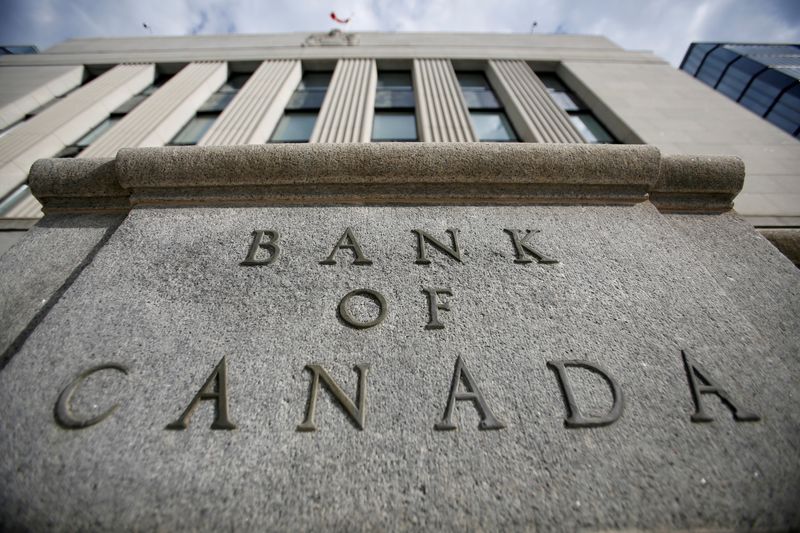 © Reuters. FILE PHOTO: A sign is pictured outside the Bank of Canada building in Ottawa

OTTAWA (Reuters) – The Bank of Canada on Wednesday revised to positive its outlook for GDP growth in the first quarter, saying Canada’s economy was proving more resilient to a second wave of COVID-19 than expected, and held its key overnight rate steady.

The central bank also reiterated that interest rates would remain at a record low 0.25% until economic slack is absorbed, which in its January forecast does not happen until into 2023, and kept the current pace of its bond-buying program.

“In Canada, the economy is proving to be more resilient than anticipated to the second wave of the virus and the associated containment measures,” the BoC said in its statement.

“GDP growth in the first quarter of 2021 is now expected to be positive, rather than the contraction forecast in January.”

Analysts said the statement was largely in line with expectations, with any tweaks to policy or tone punted to April, when the Bank of Canada will release its updated forecasts.

“They admitted the obvious – that the economy had performed better than expected at the turn of the year,” said Doug Porter, chief economist at BMO Capital Markets. “But they reinforced the message that they are not going anywhere soon with policy.”

It also noted employment remains well below pre-pandemic levels and highlighted the risk that new outbreaks of more transmittable variants of COVID-19 could add to the choppiness of the recovery.

“This doesn’t sound like a bank that is going to withdraw stimulus as quickly and as suddenly as markets expect, although it may provide a timeline for QE tapering as early as April,” said Simon Harvey, Senior FX market analyst for Monex Canada.

“For that, the progression of vaccines and incoming data will be key,” he added.

The unexpected strength of Canada’s economy through the end of 2020 and into 2021 has boosted bets that the central bank will hike rates sooner than their current guidance.

Last month, Bank of Canada Governor Tiff Macklem said Canada’s economy would see a solid and sustained rebound this year as inoculations ramp up, but warned a full recovery was still a ways off.