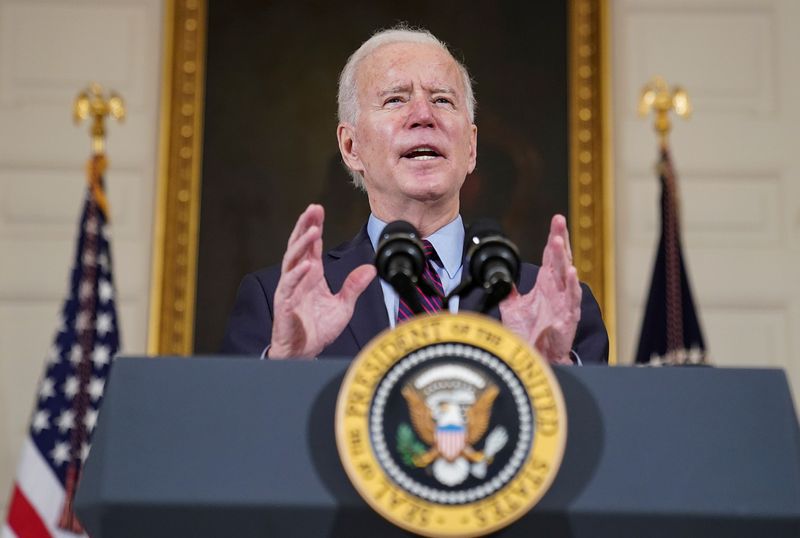 © Reuters. FILE PHOTO: U.S. President Biden speaks about the economy and need to pass coronavirus aid legislation at the White House in Washington

WASHINGTON (Reuters) – President Joe Biden is set to mark the one-year anniversary of the U.S. coronavirus pandemic lockdown on Thursday with a prime-time speech commemorating losses from COVID-19 while expressing hope for the future as vaccinations increase.

The Democratic president, who campaigned on a promise to curb the pandemic more effectively than his Republican predecessor Donald Trump, has told Americans since his January inauguration that more deaths and pain were coming from COVID-19.

But with the vaccinated population slowly increasing, Biden is conveying fresh hope even as he urges people to continue to be cautious to prevent further flare-ups.

Roughly 530,000 people have died from COVID-19 in the United States, and just about 10% of Americans have been fully vaccinated. Biden said on Wednesday he would use his 8 p.m. EST (0100 GMT) address to discuss “what we’ve been through as a nation this past year.”

“But more importantly, I’m going to talk about what comes next. I’m going to launch the next phase of the COVID response and explain what we will do as a government and what we will ask of the American people,” Biden said.

Biden secured an early legislative victory this week as the Democratic-led Congress passed his $1.9 trillion pandemic-related stimulus bill, which his administration plans to highlight in coming weeks before pushing more of his campaign-trail “Build Back Better” plan.

The president is expected to warn Americans who, like people worldwide, are weary of pandemic restrictions, not to revert to normal behavior prematurely. He has urged continued mask wearing, social distancing and good hygiene, and he has discouraged cities and states from loosening their guidelines on large gatherings even as more localities relax restrictions.

“We cannot let our guard down now or assume that victory is inevitable. Together, we’re going to get through this pandemic and usher in a healthier and more hopeful future,” Biden said at an event with the chief executives of Johnson & Johnson (NYSE:JNJ) and Merck & Co on Wednesday.

“There is light at the end of the tunnel,” Dr. Anthony Fauci, Biden’s chief medical adviser, told NBC News’ “Today” program on Thursday. “By the time we get into the mid to late summer, early fall, we’re going to start seeing a big, big difference.”

White House senior adviser Andy Slavitt said on MSNBC that he was increasingly optimistic that the country could protect its vulnerable population: “We need to do more and step on the gas the next few weeks and months to get that done, and you’re going to hear that from the president tonight.”

Trump downplayed the crisis in its early stages and eschewed mask wearing, while repeatedly predicting the virus would soon disappear even as his administration pushed to speed up vaccine development. Trump and former first lady Melania Trump did not appear in a new public service announcement released on Thursday encouraging COVID-19 vaccinations and featuring all the other living former U.S. presidents and their spouses.Biden to urge vigilance and offer hope on anniversary of lockdown2