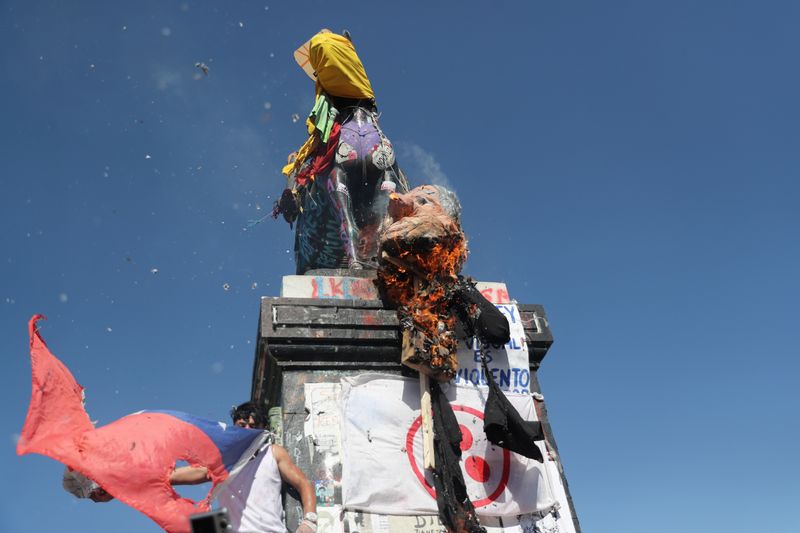 SANTIAGO (Reuters) – General Manuel Baquedano Gonzalez, a 19th century hero of Chile’s War of the Pacific, is caught in a new battle: his statue drenched in blood-red paint and set on fire as protests reignite in the Andean country’s capital.

Positioned in Santiago’s iconic Plaza Italia, the center of protests that began in October 2019, it has become a lightning rod for anger at the establishment.

It has been drenched in paint, repainted custard yellow by the authorities, daubed in graffiti, bashed with sledgehammers and set alight during protests that started in October 2019 over the high cost of living in Chile and inequality.

On Wednesday night, with fears mounting that protesters could topple it entirely, Chile’s National Monuments Council announced it would remove the statue for repairs.

On Thursday though, with protesters expected to gather in large numbers to mark the third and final year of unpopular President Sebastian Pinera in office, the bronze militaryman remained conspicuously on his plinth, guarded by armed police.

Last week, the army issued a furious statement after it was doused with fuel and set alight, accusing the perpetrators of being “ignorant”, “anti-Chilean” and “cowards.”

Daniel Jadue, the Communist Party’s candidate in this year’s presidential election, responded by calling for the army chief’s resignation and recalled the military’s role in Chile’s 1973-1990 dictatorship, saying:

“This reinforces the nefarious idea of an enemy in our midst that led that institution to commit the worst crimes in our history.”

The episode underscores how deeply polarised Chile remains despite more than a year of battling a pandemic from which it is slowly emerging thanks to one of the world’s most rapid vaccination campaigns.

The vaccine drive has bolstered the beleaguered government´s approval ratings significantly but Pinera`s only minimally.

Protests still simmer despite movement restrictions, with several hundreds of people gathering each Friday and more on prominent dates calling for Pinera’s resignation, firmer sanctions against police for rights abuses committed against protesters and better treatment of indigenous people.

Victor Herrero, founder of independent Chilean news website Interferencia, said despite the drafting of a new constitution underway and Pinera´s term ending, fury over systemic inequality heightened by the pandemic would continue to bubble up.

“The pandemic uncovered the failings of Chile´s neoliberal economic model,” he said. “There is too much uncertainty in our path. I think we have a decade of instability ahead.”Bloodied and burned, Chile statue caught in battle between protesters and police Add a Comment