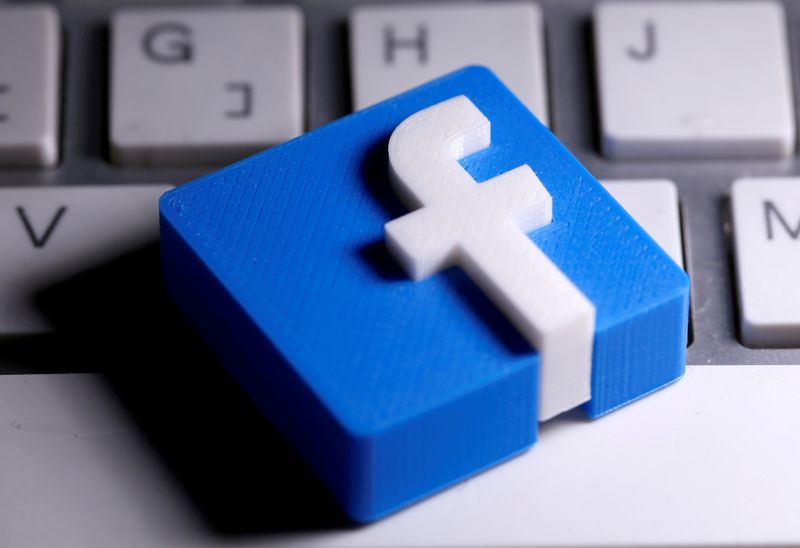 © Reuters. FILE PHOTO: A 3D-printed Facebook logo is seen placed on a keyboard in this illustration

WASHINGTON (Reuters) – Facebook (NASDAQ:FB) asked a federal court on Wednesday to dismiss major antitrust cases filed by the U.S. Federal Trade Commission and nearly every U.S. state, saying they failed to show the company had a monopoly or harmed consumers.

“By a one-vote margin, in the fraught environment of relentless criticism of Facebook for matters entirely unrelated to antitrust concerns, the agency decided to bring a case against Facebook,” Facebook said in its response to the FTC complaint.

“None of the harms typically alleged in antitrust actions is alleged here,” it said.

In lawsuits filed in December, the FTC and states asked the court to force the social media giant to sell two prized assets, its messaging app WhatsApp and photo-sharing app Instagram. U.S. District Judge James Boasberg in the District of Columbia will hear the cases.

The FTC and states accused Facebook of breaking antitrust law to keep smaller competitors at bay and snapping up social media rivals, like Instagram for $1 billion in 2012 and WhatsApp in 2014 for $19 billion.

All told, the federal government and states filed five lawsuits against Facebook and Alphabet (NASDAQ:GOOGL)’s Google last year following bipartisan outrage over use and misuse of social media clout both in the economy and in the political sphere.

In its response to the FTC lawsuit, Facebook argued that the government failed to show that Facebook had a monopoly in a clearly defined market or that it had hurt consumers.

The company also dismisses emails cited in the FTC lawsuit written by Facebook CEO Mark Zuckerberg and other executives expressing worry about the competitive threat posed by Instagram and WhatsApp.

“Lacking facts to establish either unlawful conduct or harm to consumers, the FTC attempts to bolster its claims with a grab-bag of selectively quoted internal emails and messages from Facebook executives, which are offered to show that Facebook was concerned about competitive threats from Instagram and WhatsApp – but also many, many other firms,” Facebook said in its response.

Separately, in the lawsuit brought by dozens of states and territories, Facebook argued that the state case should be dismissed because the states failed to show that they were harmed by Facebook and because they waited more than four years.

The states and FTC have until April 7 to respond.Facebook asks court to dismiss U.S. government, states antitrust cases