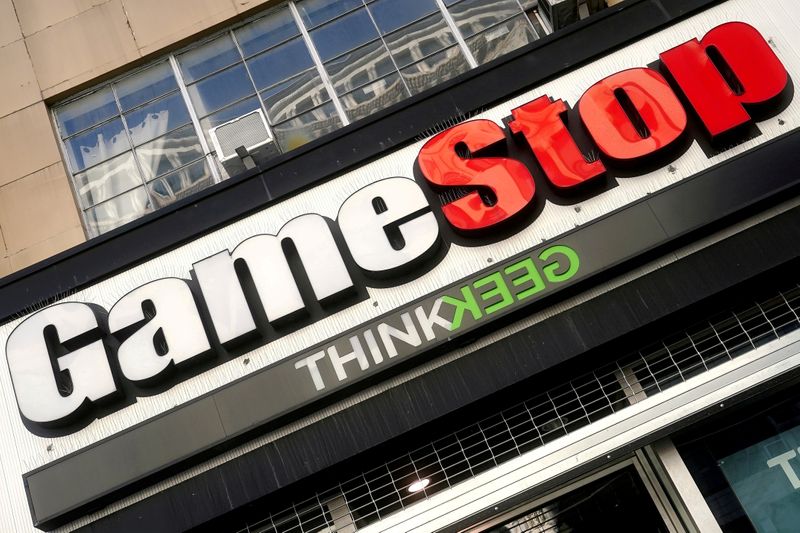 By Aaron Saldanha and Sinéad Carew

(Reuters) – GameStop Corp (NYSE:GME) and other so-called meme stocks surged on Wednesday, continuing a rally that has put the video game retailer’s shares on track for their sixth straight day of gains.

GameStop was up 18% at around $289 a share shortly after the open and its shares are up more than 600% from their February low. Headphone maker Koss Corp soared about 60% and cinema operator AMC Entertainment (NYSE:AMC) rose 10%.

GameStop bulls have also pointed to a hoped-for transition to e-commerce for the video game retailer, led by shareholder and Chewy (NYSE:CHWY).com co-founder Ryan Cohen, who is on the company’s board.

Meanwhile, analysts said Wednesday’s big rally in Koss shares is likely not the result of a short squeeze, where investors betting against a company’s shares are forced to unwind their positions in the face of a rising stock price.

Roughly 7.8 million shares of Koss traded before 10 a.m. EST (1500 GMT), far outnumbering the 780,000 shares that were sold short as of Tuesday’s close, according to Ihor Dusaniwsky, managing director of predictive analytics at S3 Partners.

“Even if you squeezed out every single short, it wouldn’t have significant effect on Koss’ share price. It’s purely a long play. That’s the primary driver of Koss’ share price,” Dusaniwsky said.

At the same time, investors were awaiting the highly anticipated public debut of U.S. gaming platform Roblox Corp above their reference price on Wednesday as demand for video games has surged amid pandemic lockdowns.

The New York Stock Exchange on Tuesday set a reference price of $45 for its shares implying a market value for the company of around $30 billion. Roblox shares recently indicated an open of between $60-$65.

Posts on social media platforms including Reddit suggest the company’s shares may draw interest from retail investors that have favored GameStop and other names whose wild rides have captivated Wall Street this year.

GameStop retains a legion of devout followers after a social media frenzy in January triggered a massive rally in which its shares surged more than 1,600%.

That spike triggered a short squeeze that shook hedge funds such as Melvin Capital, which were forced to cover their positions on GameStop.GameStop, other ‘meme stocks’ soar as markets eye stimulus boost Add a Comment