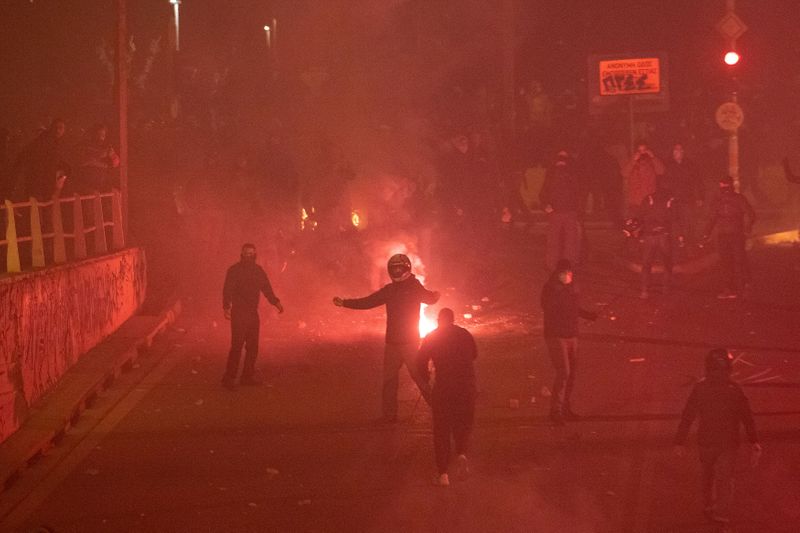 © Reuters. Demonstration against a police crackdown on gatherings in Athens

ATHENS (Reuters) – A Greek police officer has been suspended over the beating of a man in an Athens suburb this week that led to protests against police violence and fuelled an increasingly angry political row between the government and opposition parties.

Amateur video showing officers beating a man in the residential area of Nea Smyrni during checks on compliance with COVID-19 restrictions circulated on social media on Sunday, drawing thousands of protesters onto the streets within hours.

Following further clashes on Tuesday night, Prime Minister Kyriakos Mitsotakis called for restraint after a police officer was seriously hurt in the same area. Mitsotakis is expected to speak on the issue in parliament on Friday.

The incidents, under investigation by police and judicial authorities, have prompted an angry debate in Greece, with the conservative government accusing the leftist opposition of fanning tensions amid public lockdown fatigue and exploiting division to gain voters.

The opposition in turn accuses the government of “investing in repression” instead of boosting health services, and turning a blind eye to police brutality.

Like the rest of Europe, Greece has been struggling for over a year with the pandemic, imposing and lifting restrictions on movement to protect its fragile economy and health system.

Despite restrictions on movement to curb the spread of COVID-19, the country has seen a rise in street protests against government policies in recent months.

But turnout is nowhere near the scale of demonstrations during the decade-long financial crisis when tens of thousands regularly took to the streets. Polls show Mitsotakis’ conservative New Democracy party leading the leftist Syriza party by 13 percentage points.Greek police officer suspended after man beaten during COVID-19 checks Add a Comment