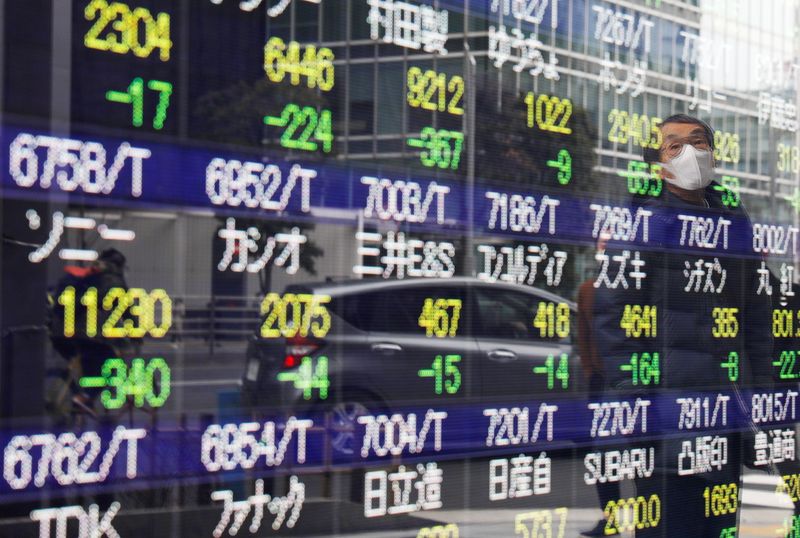 © Reuters. A man is reflected on a stock quotation board in Tokyo

NEW YORK (Reuters) – A global economic recovery from the coronavirus pandemic could send inflation sharply higher in the year ahead, boosting the appeal of assets ranging from the shares of regional banks to some government bonds, Lipper Award-winning fund managers said.

Concerns about rising inflation have stalled the more than 70% rally in the S&P 500 since its pandemic lows last March as investors price in higher borrowing costs for companies and consumers.

Benchmark 10-year Treasury yields are near 13-month highs, while the break-even inflation rate on 10-year Treasury Inflation Protected Securities, a gauge of expected annual inflation over the next 10 years, hit its highest level since 2014 on Monday.

Yet inflation could be considered a positive for the market because it implies a much steeper growth rate for the economy, said Chris Retzler, portfolio manager of the Needham Small Cap Growth fund. The International Monetary Fund expects the global economy to grow 5.5% this year after falling 3.5% last year.

“We think that we are observing the beginning of good inflation,” Retzler said. “The markets are weak at this moment from the bond market repricing an expectation of higher growth, but when that repricing ends we think that equities should begin to move higher.”

As a result, Retzler is betting on a global auto sector recovery through shares of Aspen Aerogels (NYSE:ASPN) Inc, which produces insulating material used in the electric vehicle industry to minimize fires from lithium batteries. Shares of the company are up 32% for the year to date.

“We believe the company is going to be working with almost every battery maker in the world. It’s selling the picks to the miners,” he said.

Jeff Kripke, portfolio manager of the Pioneer Fund, said that expectations for higher inflation are pushing his fund toward financials that could benefit from a “super-charged global economy” over the next two to three years.

Among his fund’s bullish positions are credit card companies such as Visa Inc (NYSE:V), which Kripke thinks will be among the biggest beneficiaries of a rebound in global travel, and regional banks that he expects will be taken over during a rebound of mergers and acquisitions activity.

“There will be a period of several quarters of an inflation scare, but in the long term digitalization, China and globalization will really keep inflation probably close to the Fed’s 2% target,” he said.

The annual Lipper Fund Awards, granted by Refinitiv, formerly the financial and risk business of Thomson Reuters (NYSE:TRI), recognize the top funds and fund management firms in more than 20 countries based on risk-adjusted returns. Winners were announced on March 11 in New York.

Not every Lipper Award winning fund is as sanguine about the effect of inflation on the economy.

Mark Egan, a portfolio manager of the Carillon Reams Core Bond Fund, said that the combination of central bank stimulus and fiscal relief packages like the Biden Administration’s $1.9 trillion plan that is expected to become law shortly will send inflation shooting higher on a long-term basis.

“If economic theory has any basis in fact, and we think it does, we are likely to see a considerable and perhaps shocking pickup in inflation that won’t be transitory unless it is quelled by painful central bank action,” he said.

As a result, Egan said, his fund is “underweight risk” and has virtually no high-yield exposure, preferring instead to remain in Treasuries despite the likelihood that any potential gains will be limited.

“People need to get used to the idea that fixed income is there to provide safety and liquidity and not to provide return,” he said.

The recent sell-off in growth stocks that outperformed during the pandemic rally due to concerns about rising inflation and interest rates are making those companies more attractive, Flanagan said. Software companies Nuance Communications (NASDAQ:NUAN) Inc and Ansys (NASDAQ:ANSS) Inc, both among the fund’s top holdings at the end of the quarter, are down more than 15% over the last month.

“The technology names have been really beat up in the last month, but their long-term position hasn’t changed,” Flanagan said. “If the opportunity presents itself to add to some of the growth names or churn some cyclical names, we will be taking it.”How Lipper Award-winning funds are playing expected inflation jump Add a Comment