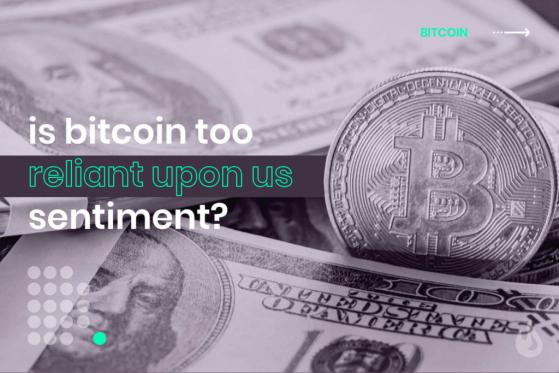 Is Bitcoin too reliant upon US sentiment?

The US is the world’s financial capital and largest economy. So, it is unsurprising that US sentiments have had a major impact on recent happenings in the global financial sector.

Since the launch of Bitcoin, 30 million Americans have begun using cryptocurrency, and America has the highest volume of Bitcoin trades in the world.

The sheer number of Bitcoin users in America will definitely constitute a strong influence on the cryptocurrency’s price direction. Recent political events and economic policies in the US, such as the 2020 General Elections and the Covid-19 Relief Funds, have also swayed the price of Bitcoin.

However, outside America, there is a growing market for Bitcoin, which could reduce American influence on the cryptocurrency.

Bitcoin Leaning on the US? Recent activity in the political, corporate, and economic sectors may indicate the extent to which Bitcoin is leaning heavily on the United States. On 30th December, US consumers received $600 stimulus checks from the $900 billion Covid-19 Relief Bill.

A healthy portion of recipients invested their stimulus checks in Bitcoin, thereby pushing prices to new highs as a result of investor sentiment driven by fear of missing out.

A large number of US-based corporations have taken an interest in Bitcoin, which has considerably influenced its price. Elon Musk’s Tesla (NASDAQ:TSLA) sent shockwaves through the cryptocurrency community when it announced it had purchased $1.5 billion worth of BTC.

Similarly, US-based trust fund Grayscale purchased $600 million worth of BTC in 24 hours, bringing the total owned by the firm to 630,000 bitcoins.

With American banks such as BNY Mellon (NYSE:BK), JPMorgan (NYSE:JPM), and Morgan Stanley (NYSE:MS) set to invest heavily in Bitcoin, the price could skyrocket to $100,000 in 2021.

American presidential elections and the appointment of key figures in regulatory agencies have always impacted the price of Bitcoin in terms of either rallies or corrections. Furthermore, the sheer number of Americans and the volume traded in the US makes the country indispensable to Bitcoin.

Other Emerging Markets Outside the US, there are other emerging BTC markets internationally which have the potential to influence the cryptocurrency’s direction. The most prominent on the list is China, the world’s most populous country and second-largest economy.

China currently has over 60% of the world’s BTC users, making it the largest Bitcoin mining country.

It is also home to BitMain, the world’s largest computer chip company for cryptocurrency mining, and the richest crypto billionaires like Micree Zhan, Jihan Wu, and Changpeng Zhao.

Africa, Latin America, and Eastern Europe are also emerging markets with a strong Bitcoin following. Nigeria is the largest Bitcoin market in Africa and the second most vibrant country by volume on Paxful after the US.

Eastern European nations like Ukraine and Russia are quickly becoming bastions for Bitcoin as millions of their citizens adopt the cryptocurrency.

Continue reading on DailyCoinIs Bitcoin too reliant upon US sentiment?