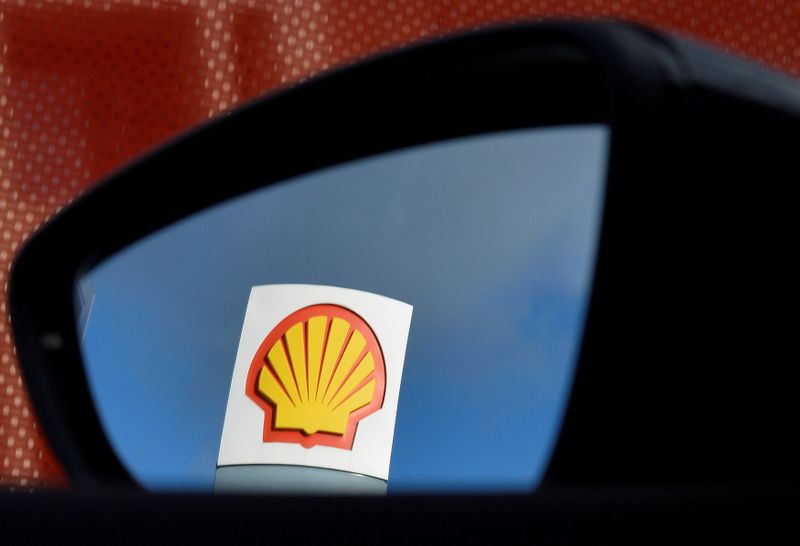 © Reuters. FILE PHOTO: A Shell logo is seen reflected in a car’s side mirror at a petrol station in west London

By Ron Bousso and Shadia Nasralla

Shell said in its annual report that total emissions from its oil wells to forecourt fuel sales fell to 1.38 billion tonnes of carbon dioxide equivalent last year, from 1.65 billion in 2019.

“One of the major causes of this larger than expected reduction in 2020 was lower demand for energy, especially for oil and gas,” it said.

Energy majors’ climate reporting differs in that some emissions data, for example the data Shell released on Thursday, includes planet-warming gases from the combustion of fuels they produce themselves plus the oil products they sell but are produced by another company.

Others, like BP (NYSE:BP), only cover the former: emissions from the combustion of fuels made from crude oil they produce themselves.

Net carbon intensity, the main measure the Anglo-Dutch focuses on in its energy transition strategy, dropped last year to 75 grams of CO2 equivalent per megajoules, a 4% reduction from 2019, Shell said.

Carbon energy intensity means a company can increase its fossil fuel output while offsetting its carbon emissions or adding renewable energy to its product mix.

Shell has begun a major overhaul to shift away from oil and gas to low-carbon energy, power trading and retail in order to reduce its greenhouse gas emissions to net zero by mid-century, including the use of offsets for residual emissions.

Shell runs around 46,000 retail fuel stations. Its executives’ pay is linked to its success in reaching its climate targets.