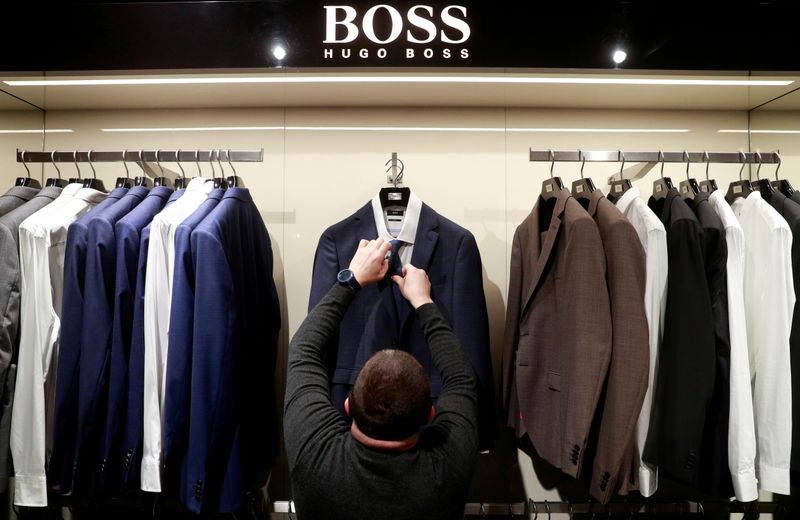 BERLIN (Reuters) – Hugo Boss expects its business will continue to suffer in the first quarter but forecast a gradual recovery from April as people buy new clothes when they emerge from lockdowns.

Although the German fashion house said on Thursday it would continue to push more casual styles, helped by a new partnership with actor Chris Hemsworth, it noted pent-up demand for smart clothes seen in China after lockdowns were lifted there.

Hugo Boss had already made the shift toward casual clothing even before customers switched suits and ties for tracksuits when lockdowns forced them to work from home.

“There is a desire in the population in many countries to go out again, to shop again,” he told reporters, adding that Hugo Boss was responding to the trend for more comfortable clothes by using more stretchy materials, even in its suits.

About 30% of stores were still closed globally in the first quarter, but Hugo Boss hopes for a gradual recovery from the second quarter as vaccinations pick up and lockdowns are eased.

Mike Ashley-led Frasers said in January it had increased its Hugo Boss stake to 15.2%, part of the British businessman’s drive to take the sportswear retailer upmarket.

Mueller said he was not aware that Hugo Boss, which expects sales and operating profit in 2021 to be “well above” the level of 2020, could be a takeover target.

Hugo Boss shares were down 2.3% at 0916 GMT, making them one of the biggest fallers on the German mid-cap index after it reported a 29% slump in fourth-quarter sales to 583 million euros ($695 million). It still managed to record a positive operating profit of 13 million euros as it cut costs.

Hugo Boss said its business continued to recover in the U.S. market and Asia/Pacific, with China recording strong double-digit growth. Rival Burberry has also seen a strong bounce back in demand in China and South Korea.

($1 = 0.8385 euros)Smarter dressing in store for Hugo Boss as lockdowns lift Add a Comment