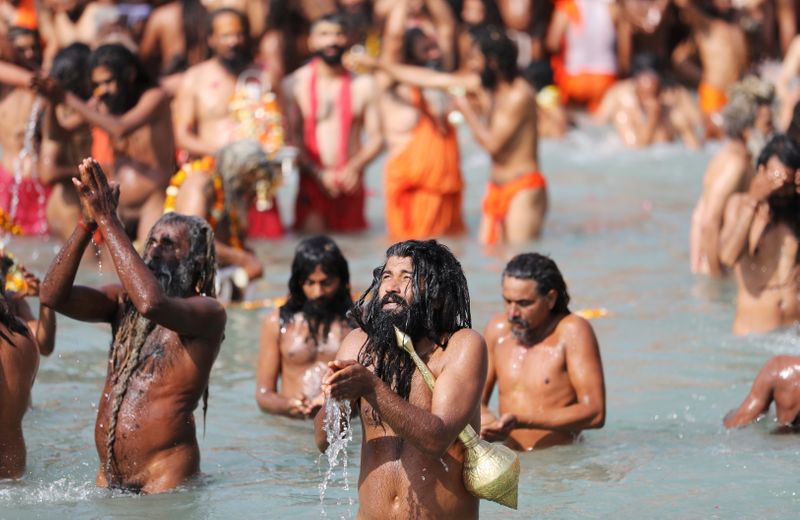 © Reuters. Naga Sadhus, or Hindu holy men, take a dip in the Ganges river during the first Shahi Snan at “Kumbh Mela”, or the Pitcher Festival, in Haridwar

By Anushree Fadnavis and Saurabh Sharma

HARIDWAR, India (Reuters) – Tens of thousands of Hindu devotees plunged into India’s Ganges river on Thursday as the country kicked off one of the world’s largest religious festivals, even as officials reported the biggest spike in coronavirus cases for three months.

Hindu ascetics known as Naga sadhus, many naked apart from a coating of ash and carrying swords or tridents, led the bathers at the Kumbh Mela, or pitcher festival, in the northern town of Haridwar.

All participants at this year’s event, that runs until the end of April, are required to present a negative coronavirus test result before being allowed into the festival grounds, authorities said. But there was little evidence of social distancing in place on Thursday as bathers jostled at the riverbank.

Devout Hindus believe bathing in the waters of the Ganges absolves people of sins, and during the Kumbh Mela brings salvation from the cycle of life and death.

“It feels to good to bathe here,” said 44-year-old Chandubhai Govindbhai Dabhi, after emerging from the waters on Thursday. “Half the people are wearing masks and half are not, but we are not afraid of corona.”

More than 22,000 people had bathed in the holy river by 8 a.m. (0230 GMT), police overseeing the festival told Reuters partner ANI, a number that was expected to rise significantly throughout the day.

Authorities said that more than 100 million people attended the festival in 2019, the last time it was held, a figure that most expect will be lower this year.

After an almost three-month lockdown last year that was one of the world’s harshest, India has relaxed almost all restrictions on movement since a peak in cases in September, including reopening vast stadiums for cricket matches, one of the country’s national obsessions.

However, India’s COVID-19 cases numbers are again surging, putting it among the top five countries reporting the most daily new infections.