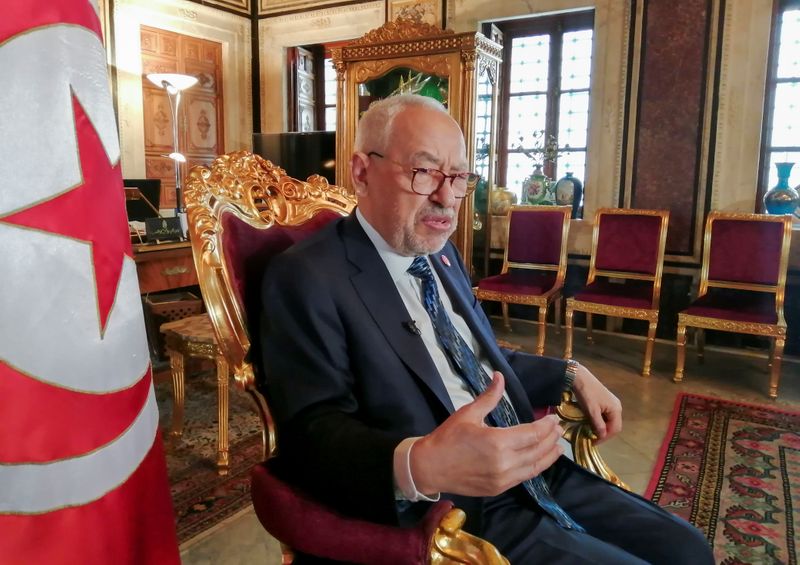 © Reuters. Parliament Speaker Rached Ghannouchi speaks during an interview with Reuters in his office, in Tunis

By Tarek Amara and Angus McDowall

TUNIS (Reuters) – The speaker of Tunisia’s parliament, Rached Ghannouchi, said he backs calls for a new national dialogue to address the country’s political standoff and constant disputes over the constitution.

Speaking to Reuters in an interview, Ghannouchi, head of the moderate Islamist Ennahda party, reaffirmed his preference for a parliamentary political system and said the standoff was endangering urgent economic reforms.

“There is a state of crisis that imposes dialogue… There needs to be a political dialogue on the constitution. And an economic and social dialogue on the mode of development,” he said in the interview late on Tuesday.

Ghannouchi has been one of Tunisia’s main political players since the 2011 revolution that ended autocratic rule and ushered in democracy but only stood for public office for the first time in 2019 when he entered parliament and became speaker.

That election returned a deeply fragmented parliament in which Ennahda, as the biggest party, secured only a quarter of seats. A separate presidential election the same month was won by Kais Saied, an independent.

The result has been 18 months of political turmoil, while Tunisia’s public debt has soared and little progress has been made on economic reforms sought by foreign lenders whose funds are critical to financing the deficit.

He also called for an amended electoral law that would make it easier for big parties to win more seats and ensure greater stability.

A dialogue has already been proposed by Tunisia’s powerful labour union, which has a million members and was part of a civil society grouping that won a Nobel peace prize in 2015 for helping to end an earlier political crisis.

However, the idea, initially embraced by Saied, has made little headway. Ghannouchi had already called for a national dialogue on economic reforms but has not previously backed the idea of inclusive talks on the political system.

The latest crisis was triggered by Prime Minister Hichem Mechichi’s decision to sack four cabinet members allied to Saied, who has in turn refused to swear in their replacements.

Ghannouchi rejected calls to replace Mechichi and start afresh with a new cabinet, saying this would further delay economic reforms.

“We support a small cabinet like this one that can carry out the necessary reforms,” he added.

The dispute echoes other clashes between presidents and prime ministers since the adoption of the 2014 constitution that shared power between the two branches of state.

Disputes were meant to be resolved through a constitutional court of 12 judges appointed by parliament, the president and a judicial committee, but it has yet to be formed due to disagreements.

Ghannouchi said he hoped to bring together party leaders this week for another attempt at choosing members of the court: “It is a way out of the crisis.”Tunisia’s parliament speaker urges dialogue to end political crisis Add a Comment