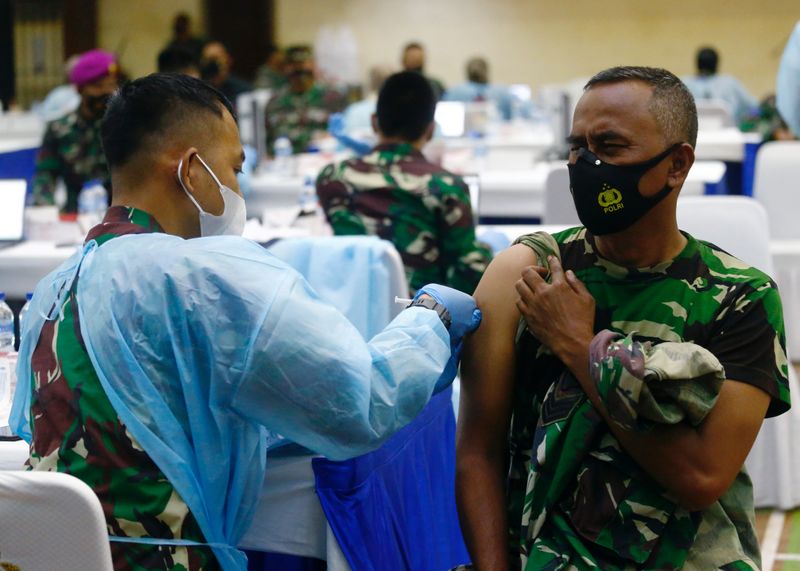 By Rupam Jain and Euan Rocha

MUMBAI (Reuters) – The U.S.-backed Quad alliance aims to invest in India’s pharmaceutical capacity as it looks to ramp up COVID vaccine output, but U.S. curbs on exports of key materials could hamper that effort, sources say.

The Quad alliance, grouping the United States, Japan, Australia and India, wants to expand global vaccinations and in turn counter China’s growing vaccination diplomacy in Southeast Asia and around the world. India is the world’s biggest vaccine maker.

As the alliance’s first virtual summit kicks off on Friday, one key assurance that India will be seeking is for an easing of export curbs, said two sources briefed on the matter.

“India’s seeking both raw materials and investments from Quad partners and once this aspect is resolved, then the Quad alliance can start large-scale distribution starting in Southeast Asian countries,” said one Indian government source.

Some of the additional supplies from India will go to Southeast Asia as China pushes its own vaccines to supply Indonesia, Philippines and others in the region.

But the Serum Institute of India (SII), the world’s biggest vaccine maker, has said it is worried the U.S. ban on exports of materials like filters and bags, keeping them for U.S. companies, could limit production, especially of the Novavax shot that it was set to start making next month.

“The ramp-up and scaling of Novavax production could take a sharp hit, and if restrictions persist this could down the road also slow the ramp-up of Covishield,” said a source close to the matter, referring to the Oxford/AstraZeneca vaccine that SII is also licensed to produce.

SII did not respond to a request for comment.

U.S. officials did not immediately respond to requests for comment. India’s foreign ministry had no immediate comment.

Limitations to production of the Novavax and Covishield shots risk hurting the GAVI/WHO COVAX initiative that is heavily reliant on those two vaccines as it shares inoculations with poorer countries.

The World Health Organization has said it also harbours a “lot of concerns” over manufacturing, supplies and procurement of vaccines and related materials.

“There’s a shortage of materials, of products that you need for the manufacturing of vaccines and for the vials, the glass, the plastic and the stoppers – everything that goes with that,” WHO’s chief scientist, Soumya Swaminathan, said in a World Bank discussion last week.

“That is where we need global agreement and coordination – not to do export bans, for example, for these raw materials.”

India’s Biological E has tied up with J&J to potentially contract-manufacture up to 600 million doses of its vaccine per year. They have signed an initial deal, but production volumes have not been agreed upon.

India makes more than 60% of all vaccines produced globally and its companies have promised to manufacture more than 3 billion doses of COVID shots a year.