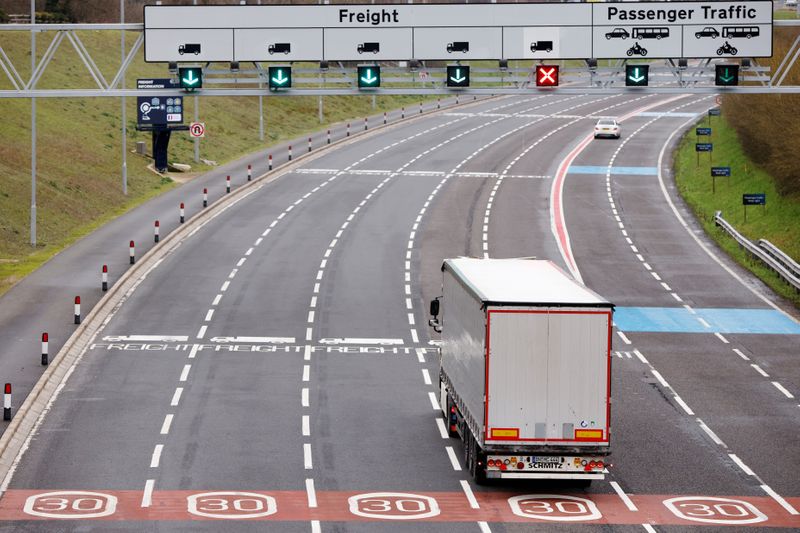 © Reuters. FILE PHOTO: A lorry arrives at the Eurotunnel check-in, in Folkstone

LONDON (Reuters) – Britain on Thursday delayed the introduction of a range of post-Brexit import checks on goods from the European Union by around six months, saying businesses needed more time to prepare because of the impact of the coronavirus pandemic.

The British Retail Consortium said the government was not ready and the required border control posts were “little more than a hole in the ground”.

Britain finally left the European Union at the end of last year, creating a full customs border with the bloc where previously goods could move freely.

Brussels immediately introduced checks and paperwork for goods moving from Britain into Europe, which has led to delays, higher costs and a serious blow to some businesses such as fishing that are struggling to compete.

To soften the impact, Britain had already delayed the start of import checks on food until April 1, but UK buyers of goods such as cheese and charcuterie had said their smaller European suppliers were not willing to engage with the bureaucracy.

Those checks will now start in October. Full processes for some other imports will not come into force until January 2022.

“Until the infrastructure is in place, with IT systems ready and established processes for checks and paperwork, it would be foolhardy to introduce full requirements for EHC (export health certificate) documentation, pre-notification of imports, physical checks and more,” Andrew Opie at the British Retail Consortium said.

The British Chambers of Commerce welcomed the move but urged the two sides to reopen talks to improve the flow of trade.

The government said the delay was in the national interest.

“We will now introduce border controls broadly six months later than planned to give traders time to focus on getting back on their feet as the economy opens up after a difficult year,” Cabinet Office Minister David Frost said in a statement.

Official data released on Friday will show the impact of Britain’s new post-Brexit trade relationship on imports and exports in January.UK delays post-Brexit import checks to give more time to prepare Add a Comment